In his cell at Primatech Paper Co., Mr. Bennet is visited by Claire, who tells him she's been caught. Bennet quickly realizes it's not Claire, but Candice using her powers to mimic his daughter. Thompson arrives and sends Candice away. He tells Bennet that they're keeping him alive out of friendship, but that when the orders come down to kill him, they will.

In Linderman's archives, Nathan and Mr. Linderman discuss the art. Linderman claims he's a humanitarian and wants to heal the world; when Nathan balks at the statement, Linderman demonstrates his power by healing a dying flower.

As a cockroach crawls past him, Matt Parkman wakes up in his cell to Mr. Bennet's thoughts in his head. Bennet tells Matt to signal him by banging on a pipe, which he does.

Meanwhile, Nathan examines a painting of Hiro rescuing a Japanese schoolgirl and says that he knows Hiro; Linderman says to tell him he wants his sword back. As they examine Isaac's painting of the explosion, Linderman goes on to discuss an earlier generation of evolved humans who worked together to make the world better, until his associates became greedy. He claims the explosion will serve as the catalyst which will allow them to heal the whole world, not just individuals. When Nathan replies that the explosion will destroy half of New York City, Linderman rationalizes that it's less than .07% of the population--an acceptable loss--and that Nathan can be the person to lead the people through the difficult time. Nathan argues that he's losing the election anyway, but Linderman shows him a painting by Isaac Mendez of Nathan in the White House. Nathan points out that the explosion is caused by his own brother, but Linderman claims that it's merely Peter's part to play.

Back at Primatech, Mr. Bennet guides Matt to break off a rusted pipe and use it to bludgeon the approaching guard. Matt grabs the guard's pass and leaves his cell.

At Mohinder's apartment, Peter arrives and finds a bloodied Mohinder pinned to the ceiling. Turning around, he finds himself face-to-face with Sylar, who pins him to the wall and attempts to telekinetically cut open his head, but the wound heals automatically. Sylar is momentarily surprised, and Peter uses his distraction to hurl Sylar across the room, mimicking the killer's own telekinetic ability. Sylar crashes into a glass-fronted bookcase; with his concentration broken, Mohinder and Peter both fall to the floor. As Sylar approaches him, Peter becomes invisible, but Sylar merely lifts all of the broken glass into the air and hurls it across the room; one shard becomes bloody, and then Peter fades back into view with the shard protruding from the back of his head. He drops to the floor, but before Sylar can reach him again, Mohinder smashes him to the ground with the map. Mohinder goes to Peter, but he's unresponsive. 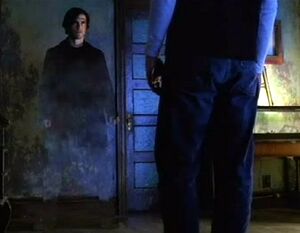 At Angela's home, Claire looks at a photo of Peter and Nathan at Nathan's wedding. Angela explains that Peter and Nathan didn't know about Claire. She says that she and Mr. Petrelli took steps to protect Claire, and that after the fire, she let Nathan believe Claire was dead. Angela admits to knowing about Claire's powers, and urges her to go to Paris until she's old enough to make her own choices. Claire asks her if she has powers, too, but Angela deflects the question.

Sylar comes to in Mohinder's apartment to find Peter and Mohinder missing. He sees Chandra's laptop shattered and ruined -- and the list with it. He finds a scrap from 9th Wonders! with Isaac's name and address.

At Isaac's apartment, Isaac gives a courier the art for the latest issue of 9th Wonders! to deliver to his publisher. He claims it will be the last issue. He shows the courier a page from the comic with Hiro, five years in the future, standing on the rooftop of the Deveaux building. He gives the courier his sketchbook, telling him it might be worth something someday, and glances around at the paintings of his own death.

In Las Vegas, NV, Jessica and D.L. argue outside their home. D.L. is packing to leave; Jessica argues that everything she has done has been to protect Micah. D.L. tells her she seems to be reveling in the violence, and that she hasn't turned into Jessica--she's turned into her father. Just then, one of Linderman's guards arrives and tells Jessica that Linderman wants to see her. D.L. tells her that she needs to protect Micah from her life, and that she can say goodbye to him that night.

At Primatech, Bennet continues to guide Matt, helping him find a Primatech jacket. Thompson and a Primatech agent walk past, discussing their plans to move Bennet, Matt, and Ted Sprague. Following Bennet's commands, Matt uses the guard's pass to release Ted from his cell. Thompson and the agent arrive at Matt's cell and find the downed guard; Thompson pushes an alarm button.

At Angela's home, Mohinder arrives in his taxi. He tells her Peter is dead. She examines Peter's body and sends Mohinder away. Claire comes down stairs and sees Peter dead as Angela begins to break down sobbing.

Jessica arrives at the Corinthian Casino and meets with Mr. Linderman. He tells her he needs a favor: to borrow Micah's talent. He promises he'll help Micah achieve something monumental. When Jessica refuses, he says the request was merely a courtesy, but Jessica tells him he's not taking her son. 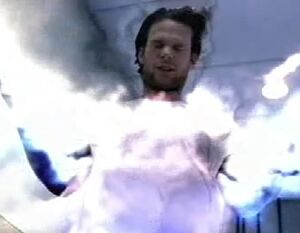 Ted tries something new to escape.

At Primatech, Bennet relays information to Ted through Matt, guiding Ted to release an electromagnetic pulse. Ted tries twice, and manages to do so, knocking out the power in the building. Matt persuades Ted that they have to go back for Bennet; they arrive at his cell and free him.

In New York City, Nathan arrives at his mother's home and sees Peter's body. Nathan sobs that Peter wasn't supposed to die "this way". Angela tries to persuade him to hide Peter's death until after the election. Claire asks to see Peter. As she cradles his head, she finds the shard of glass and removes it; immediately, Peter regenerates. He tells Claire she saved his life; she says she guesses they're even.

Peter and Nathan sit in the home office in Angela's home and discuss Peter's death, their relationship, and Claire. When Peter points out that he can't die because of Claire's ability, Nathan seems lost in thought. He wonders whether Peter would be able to survive the explosion. Peter argues that Claire is somehow connected to everything that's going on, and that they shouldn't let Angela send her away. Angela comes in and Peter begins to explain about his abilities, but Angela tells them both that she knew long before they did.

At the Burnt Toast Diner in Midland, TX, Matt, Ted, and Mr. Bennet stop to eat and plan their next move. Matt wonders if they're safe, but Bennet claims the Company won't come after them in a public place. He tries to persuade them to take out the tracking system in New York. Matt asks if that's where Linderman is; Bennet asks how he knows that name, and Matt reveals he read it from Thompson's thoughts--and then realizes that Bennet never knew that Linderman was the head of the Company. Bennet explains that Linderman is in Las Vegas, but again urges them to head to New York.

At the Sanderses' home, Micah and Jessica prepare to leave. Micah asks why Jessica picked him up early, and Jessica explains that they have to meet with Linderman. Linderman introduces himself to Micah and asks how he'd like to save the world. As Micah rides off in Linderman's limo, Jessica's form begins to shiver, and she turns into Candice just as the real Jessica pulls up in her Cadillac. 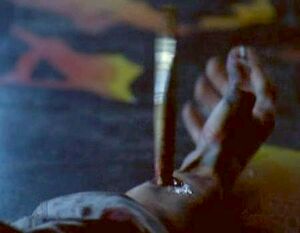 Isaac gets pinned down.

At his apartment, Mohinder discusses Sylar with Thompson, who explains that Bennet is no longer with the Company. Thompson tells Mohinder that they'll need to work together to stop Sylar.

At Isaac's apartment, the artist comes out of a precognitive trance in front of a painting of Sylar. From across the room, Sylar marvels at Isaac's ability. Rather than seeming startled, Isaac merely remarks that Sylar is late, and reveals that he knows Sylar is there to kill him. He explains that he tried fighting the future, but that he's seen that Sylar is defeated. Sylar hurls him to the ground and pins him down through his wrists and ankles with his own brushes, demanding that Isaac show him the depictions of his future, but Isaac explains that it's gone. Isaac says that Sylar can't fight the future, and Sylar counters that Isaac can't, either. Isaac says he knows his part: to die here, but not before he shows the others how to kill Sylar and stop the bomb. Sylar closes in for the kill.

At Angela's house, Nathan uses the glass shard from Peter's head to open a package: it's the painting of himself in the White House. Claire comes in to talk to him. He tells her he wants to be there for her, but can't yet because of the election and everything that's happening. He tells her to go to Paris with Angela for one week, until after the election (and thus the explosion). 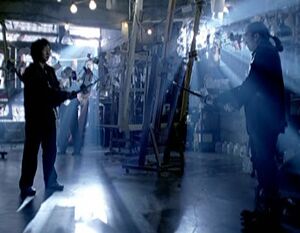 Back at Isaac's studio, Sylar is in a precognitive trance, painting an image: a gruesome depiction of himself in office instead of Nathan. Isaac lies dead nearby, next to his gun, just as Hiro found him in the future.

Five years in the future, Hiro and Ando look out at a devastated New York from the Deveaux rooftop. Ando urges Hiro to return them to the present, but Hiro reasons that they can learn what went wrong before returning to their own time. He says that Isaac will know what's happening. When Ando points out that Isaac was dead the last time Hiro jumped into the future, Hiro argues that Sylar has been captured, so Isaac may still be alive.

They arrive at Isaac's apartment to find a number of pictures, clippings, and notes hanging from strings which weave all across the studio. Hiro says he thinks it's a timeline; on the strings, notes discuss saving the cheerleader while newspaper clippings talk about Nathan Petrelli's leadership following the explosion. The two hear a noise, and Hiro draws his sword ... only to come face-to-face with his future incarnation.

"You get that mouth from me."

"I recommend the cherry pie."

"How would you like to save the world today?"