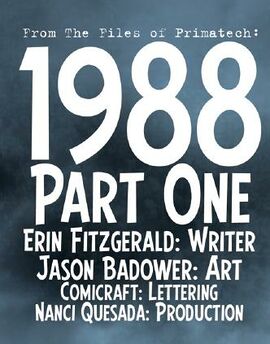 In 1988, Noah and Sandra are on their honeymoon in Berlin, Germany. While Sandra contemplates getting a dog, Noah is visited by Thompson, who gives him the task of returning an envelope to "Petrelli". Thompson then wanders away and his partner, Claude Rains, asks who Noah is. Thompson tells him not to worry about it and informs Claude of their latest mission to capture a special KGB agent. Claude wonders what the mission will entail and Thompson explains that they can bring her in or, if she resists, they can terminate her. Claude and Thompson discuss Sylvia and her potential abilities.

When they arrive at Sylvia's supposed hideout, Claude wonders if Thompson would like to become invisible again. Thompson refuses, and suggests that they split up. He tells Claude not to be a hero and heads upstairs. While invisible, Claude enters a room and is attacked by Sylvia, who suggests that next time he not use a flashlight. Sylvia tries to warn Claude that Thompson is using him and Claude wonders what she means by that. Thompson arrives and demands to know where "it" is. Thompson tries to shoot Sylvia, but she shrinks and hides.