René, commonly called "The Haitian", is a mysterious individual whom Thompson recruited to the Company from Haiti, who is partnered with Noah Bennet to aid in the investigation of evolved humans. In time, René and Noah became firm friends and later, due to emotional frustration and guilt over their actions on behalf of the Company, decide to rebel against their superiors and go on the run. Precious little is known about his past; however, René is religious and kept a necklace of the Symbol, which he later gave to Peter Petrelli. Five years after Claire Bennet's reveal as an evolved human, René reunited with his old friend Noah. However, Noah discovered that for unknown reasons, René had erased his memory after the events of the Odessa Unity Summit, and at the behest of Noah himself, René attempted to kill him. In defense, Noah shot René resulting in his death. He was later brought back when Noah went back in time with Hiro Nakamura and warned his past self not to use René, but Caspar instead. He is an evolved human with the ability to manipulate people's minds and is considered one of the Company's most valuable resources.

For an episode-by-episode summary, see René: Season One History. 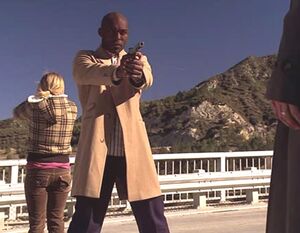 The Haitian prepares to shoot Mr. Bennet for his own safety.

The Haitian works as a member of Mr. Bennet's team at Primatech Paper Co. Together, the Haitian and Mr. Bennet bring in Matt Parkman, whose special ability is almost completely blocked by the Haitian. They proceed to attempt a similar abduction routine on Nathan Petrelli, but Nathan escapes. The Haitian assists in many other abductions of people with special abilities, including Ted Sprague, on behalf of an organization known as the Company. With Eden's assistance, the Haitian is able to capture Sylar and bring him back to Primatech, although he eventually escapes. The Haitian uses his power to erase the memories of Mr. Bennet's wife and son and others. Bennet orders him to erase his adopted daughter's memory as well, but he instead takes her into his confidence. When the Company learns of Claire's ability, the Haitian shoots Mr. Bennet and erases his memory and takes Claire into hiding. Claire, however, eludes the Haitian and travels to New York City to find Peter Petrelli. The Haitian gets there first and is waiting for Claire at Peter Petrelli's apartment with Claire's biological grandmother.

The Haitian remembers a story about himself as a young boy in his village in Haiti living with his father, Guillame. He discovers his abilities for the first time when he suppresses his father's abilities just by being present. Furthermore, when Guillame attempts to redeem himself, the Haitian wipes clean the minds of many villagers, reducing them to a zombie-like state. Guillame accompanies the Haitian to the crossroads, seeking penance and planning to kill his son. The Haitian becomes one with his father's mind by touching him and causes him to recall the two of them being happy together, such that Guillame commits suicide instead of murder. Afterwards, the Haitian goes back to the village and meets Thompson for the first time. 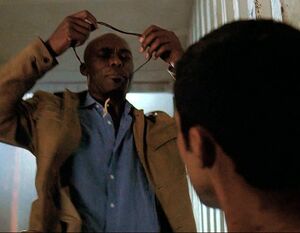 The Haitian passes his Symbol necklace to Peter.

Shortly after the explosion, the Haitian appears in Bob's office negating Peter's powers. Several months later, he is sent to the docks with Elle to capture Peter and Adam Monroe. He forces Peter into a shipping container to be shipped to Cork, Ireland and takes his memories, but not before revealing that he is on his side and giving Peter his necklace.

Mohinder Suresh is sent on an assignment, which turns out to be a mission to heal the Haitian, who believes the virus he's contracted is a punishment from God. Suresh persuades the Haitian to try the antivirus, which succeeds. When Mohinder explains that he is working for "a company," the Haitian appears to take Mohinder's memory of the entire incident and flees. The Haitian then manages to track down Noah Bennet at the copy shop, and the two men greet each other, smiling.

Noah and the Haitian track a series of eight paintings to Ukraine. The two go to the home of Noah's mentor Ivan to force him to reveal the location of the paintings. Noah threatens to strip Ivan of his family memories if he refuses. When Ivan refuses to cooperate, the Haitian removes Ivan's memories of his first meeting with his wife, and only then does Ivan begin to cooperate. After Ivan reveals the location of the paintings, the Haitian goes with Noah to recover them. 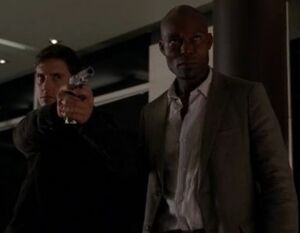 The Haitian blocks Arthur's ability, allowing Peter to kill him.

Under the orders of Angela Petrelli, the Haitian travels to Berlin to secure her half of the formula. He is attacked by Hiro and Ando, who believe that he is out to steal it. While knocked out, his part of the formula is stolen by Daphne and he awakens to find Hiro and Ando completely shocked at what has happened. He takes them back to America and introduces them to Angela, who gives them the task to find Adam Monroe.

The Haitian becomes Peter's partner in his mission to kill Arthur Petrelli and when Peter has second thoughts about it, the Haitian tells him that it is for the greater good. He stops Arthur from using his powers but is unable to hold him long enough, allowing Arthur to attack Peter. Sylar intervenes kills Arthur. The Haitian rushes off to catch Sylar.

Now working as part of the new Company, the Haitian is called by Noah to wipe all memories of Tracy Strauss from Danko's mind, helping her to start a new life. When Claire is attacked by an invisible assailant at college, Noah sends the Haitian to accompany Claire so that Becky will no longer be able to remain invisible around her. Claire is happy with this arrangement, and refers to the Haitian by his real name, René. However, Gretchen is not happy and decides to go home, so Claire tells René to keep Gretchen safe until she gets to the airport.

Later, Angela sends René to wipe the memories of "Nathan" and Peter, but René instead decides to give Peter the address to Nathan's corpse so that he can discover the truth about his brother himself. When Peter learns the truth, he replicates René's ability at Mercy Heights Hospital so that he can erase Sylar's memories and destroy his mind, thus returning Nathan to him. On Thanksgiving, René stands behind Noah as he threatens Gretchen with memory erasure unless she dissuades Claire from returning to the carnival.

René has the power to manipulate people's minds. He can selectively interfere with the use of special abilities and selectively erase memories. He uses his power in conjunction with hand-to-hand combat skills to subdue other evolved humans, as shown in Four Months Ago... when he defeated and restrained Peter Petrelli. He can render individuals unconscious by physical contact. While he can nullify powers out to some indeterminate range without physical contact, his other mental abilities seem to require touch (The Eclipse, Part 2, Our Father). His powers do require mental effort, and sufficient resistance by another evolved human of sufficient power and/or skill can cause him physical and mental strain (Our Father).

"He sent me here to make you forget. Like he sent me to your friend, and your brother, and your mother so many times. He'll be here soon, expecting that you won't remember anything, but it is very important that you do. Tell me Claire, can you keep a secret?"

"What you can do, what I can do--that is God. Respect it accordingly."

"Of course, there is always a company..."

"Don't you need to write any of this down?"

"Memory is not an issue for me."

Please refer to Theory:René for fan-created theories and other speculation.