A mysterious man, Bob approaches Mohinder at a lecture about his research on the Shanti virus. When told that the funding would be extremely expensive, Bob transforms the spoon he is holding into gold, telling Mohinder that they have their "own private Fort Knox". Bob recruits Mohinder to join the Company to cure people ailing from the virus and helping research the virus further. Nathan Petrelli shows Matt Parkman a photo of a group of twelve that includes Bob. Nathan remarks that he does not know Bob's last name. 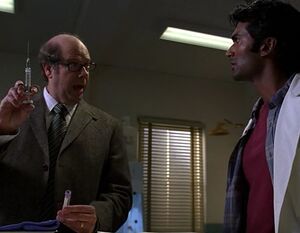 Mohinder brings Molly to the Company for treatment. Bob promises that he will care for her before giving Mohinder an assignment to find another evolved human and giving him a taser. Jessica breaks out of her confinement and attacks him only to be stopped when Mohinder electrocutes her. Niki is confined in a hospital bed. Bob tells her that multiple personality disorder is a serious problem and tries to reassure her. After Mohinder brings in Monica, he tells Mohinder he will test a variation of the Shanti virus on Monica. Mohinder explains that they could create an incurable version of the virus, and that it can spread, but Bob treats it as a risk they need to take. Mohinder tries to reason that Monica is a nice girl who loves her ability, but Bob is still willing to make Mohinder inject her. Later, Mohinder comes up to Bob and tells him that he will not inject the virus into Monica to take away her ability, throwing the syringe away. Bob tells him that they'll find someone else to do it, and there's plenty more of the virus left over. Mohinder throws a stool at a storage cabinet full of vials and tells Bob that he's taking Molly. Bob apologizes to Mohinder and explains that he has been with the Company for thirty years, and they have made many difficult decisions, some of which he still regrets. Bob explains that in dealing with a dangerous individual, he made a poor decision in forcing Mohinder to give Monica the virus. Mohinder remembers the file with Adam Monroe's name written on it, and Bob agrees. Bob explains that Mohinder is with the Company not just for his research or his blood, but to keep them in line. Mohinder notes that Molly is not ready to leave, and that he does not trust Bob at all, and Bob explains that he has someone who will help with Mohinder's trust issues.

Bob suggests that the Shanti virus be used on Maury, who has come to kill Bob. However, Maury uses his ability to put Niki in a dream and D.L. tells her to kill Bob. In order to stop herself, she injects the virus in herself. Mohinder tries to treat her with his antibodies, but finds that the virus has mutated and cannot be stopped by his blood. When he tells this to Bob, Bob decides to destroy all the vials of the virus they have, and that they must find Claire. Bob explains that her regenerative ability may help save Niki. Mohinder tells Bob that he has been working with Noah Bennet to take down the Company and he does not know what is right anymore. After Mohinder's confession, Bob gives Mohinder a Company issue gun. Bob also tells Nathan that Peter is still alive, and shows him video surveillance to prove it.

Bob plans a mission with Mohinder and Elle to capture Claire to get her blood. After Claire is captured and takes some of her blood, Bob receives a call from Noah that he has captured Elle and wants Claire back. Outside Costa Verde, Bob is present at the trade off with Elle and Claire being swapped. As soon as West flies Claire away, Elle shoots West and Claire, sending them plummeting to the ground, and Noah shoots Elle in the arm. Bob attends to Elle and Noah points the gun at his head. Just before he can pull the trigger, Mohinder shoots Noah. Bob visits the Bennets to pay his condolences, leaving a jar of ashes with them. Bob gets into his car with Elle and asks her if she can regain his trust. Later, Bob finds that Mohinder has found a cure for the new strain of the Shanti virus. After an argument, Mohinder tells Bob that he wants the Company to destroy all strains of the virus. After healing Noah, Bob tells him that Claire is trying to reveal the Company, and tells him that the Company will have to take drastic measures to keep Claire quiet.

Bob and Elle watch a security feed as Agents Cruz and Karina attempt to apprehend Sylar in Costa Verde and are killed. He blames Elle for allowing Sylar to get away, and expresses doubt in her competence.

After Elle arrives at her father's office with a plan to find Sylar, she finds Bob has been killed by Sylar with his brain removed.

Sylar visits the Company's gallery, where his portrait is hung in remembrance among those of other deceased agents.