Create Your Hero is a fan-based, interactive promotion on NBC.com which calls upon Heroes fans to vote on various physical and personality attributes for the creation of a new hero. The voting ended on September 29, 2008. On November 10, 2008, the new hero was featured an original, live-action series which can be found exclusively on NBC.com. The promotion is presented by Sprint.

Originally, beginning February 4, 2008, fans were able to vote (online or via Sprint cell phones) between two heroes which were a culmination of fan-selected attributes. Voting will end on September 29, 2008. 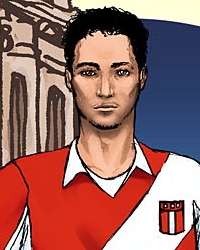 Santiago is twenty three. He is an only child, and lives with his mother in a poor part of Lima. He works as an auto mechanic, but has a burning desire to go out in the world and accomplish something that will make his mother truly proud.

Santiago lost his father years ago to the Peruvian civil war. He carries that loss in his heart, but has found solace in the teachings of the Catholic church. Santiago attends mass every Sunday, in a local cathedral which was built by the Spanish Conquistadors more than four hundred years ago.

It was one Sunday after mass when Santiago first discovered his powers. He was playing soccer with his friends in a dusty lot, when he suddenly realized that he was faster--much faster--than his opponents. In fact he was so fast, that he had to hide his ability in order not to attract too much attention.

Santiago loves being fast--he uses his power to become the star of his soccer team--but he believes that his abilities are a gift from God, and feels strongly that they should only be used for good.

On 24 July, 2008, the third and fourth paragraphs were changed to reflect the addition of a new ability.

One Sunday after service, he discovers that he's indeed very special. During a weekly soccer match with friends, he gets the ball and as he turns towards the goal, something incredible happens. Looking down the field he suddenly sees everything as grid. Quickly scanning the other players, he sees all their possible maneuvers and blocks -- determining the best way to make a goal. He has the power of accelerated probability. Not only that but he realizes he can run super fast! Combined, the two abilities make him unstoppable. He takes off, dodging every attempted block and scoring a goal as his friends look on, astonished.

Santiago immediately loves his powers and uses them to become the star of his soccer team. He believes his abilities are a gift from God though, and feels strongly they should only be used for good. 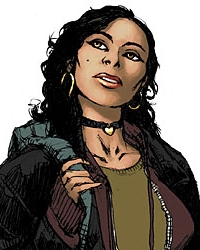 Audrey is eighteen. She lives with her mother and younger sister in Paris, in an apartment above the family's bakery. Audrey's father is out of the picture, and Audrey's mother has fallen sick, so Audrey has been forced to take responsibility for the family business, despite the fact that she is still in school.

It is while working behind the counter at the bakery that Audrey discovers her power--the power to affect the speed of other people. Audrey can speed people up, or slow them down to a crawl.

Suddenly everything is possible. Audrey can easily help her sick mother, finish her homework on time, and hang out with her friends--practically all at the same time.

However, Audrey begins to succumb to the temptation of using her powers for darker purposes. She starts by doing nothing more than speeding up her math class to get out early, but then, before she knows it, she is slowing down everyone in the bakery so that she can steal money from the cash register.

As Audrey's understanding of her powers grows, she resolves to use them for the greater good, but sometimes her means of getting to that good are morally questionable.

On November 4, 2008, the winner of the Create Your Hero contest was announced with the release of a promo on NBC.com. The promo is for a webisode that features Santiago and his super speed.