Difference between revisions of "Episode:I Am Become Death"

Peter and Future Peter travel four years into the future to witness how the world has changed. In this future, many people have abilities. The formula that gives people abilities is public knowledge, and anyone with the means can obtain it. Numerous people now fly around New York City under their own power. Future Peter tells Peter that he needs to go to Sylar for help, but before he can say another word he's shot by Claire. Peter escapes just in time.

Future Claire, who now hangs out with Daphne and Knox, plans to use Molly to find Peter. Little does she know that Peter has gone to see Mohinder, who is now fully mutated and likes to hide in the dark. He gives Peter some info on where to find Sylar, and when he heads to Costa Verde, where he's shocked to find Sylar wearing an apron, with a kid and making waffles.

Sylar pulls Peter aside and fills him in on the fact that they're brothers. Future Sylar has atoned for his evil ways and now spends his days caring for little Noah, who must be named after HRG. Sylar mentions to Peter that he fights his "hunger" for his son. Peter tries to tell Sylar that the world is doomed, and suggests he try painting the future if he's not convinced.

Meanwhile, Daphne visits Matt, who is her husband. He doesn't want to use Molly to find Peter, but his wife talks him into it. After she gets the info, she passes it on to Claire, so they can go find Peter. Back in Costa Verde, Sylar tells Peter to fix his watch if he wants to learn his intuitive ability. Peter picks up the power, and Sylar says he is sorry. He had mentioned earlier that this ability causes a person to develop an insatiable "hunger", which if not brought under control causes a person to kill others. Both Peter and Sylar are soon interrupted by the trio of Future Claire, Daphne and Knox.

A confrontation takes place, and Peter punches Claire before she can pull the trigger of her gun. Daphne attacks Peter, while Knox, strengthened by Noah's fear, throws Sylar through a table, accidentally killing Noah in the process. Sylar gets so angry that he unleashes several punches upon Knox before involuntarily activating his radioactive power, resulting in a nuclear explosion that wipes out the entire area of Costa Verde. 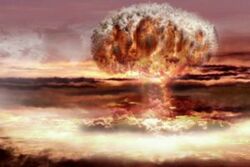 Over 200,000 people die in the explosion, but Claire survives and is about to torture Peter with a scalpel. Before she can finish the task however, she is interrupted by President Nathan Petrelli, who tells his brother that Congress has decided to move forward with a superpowered army. Nathan invites Peter to inspect his mind, but as Peter attempts to do so he loses control of himself while trying to figure out Nathan's true intentions. The "hunger" that Sylar described quickly takes over Peter's mind. Peter cuts Future Nathan's head, killing him. He quickly comes to his senses and with Secret Service banging on the door, teleports back to the present day to Sylar's cell at Level 5. Sylar tells him that he is now infected with the "hunger" because he acquired the power of intuitive aptitude. Peter responded by saying that he will never let himself be like Sylar, but Sylar says that he already is.

Back in the present, Mohinder studies the bizarre rash on his back, but is distracted when he hears the neighbors fighting. He injures the man before leaving the scene, appearing surprised at his increased aggression. After arriving back at the lab, Maya attempts to charm Mohinder, but is instead greeted by an outburst that appears to be caused by Mohinder's heightened aggression. Maya storms out, and as Mohinder continues his work he soon realizes that there's no way to remove the rash or to reverse the DNA transformation that is causing such a drastic change in his body.

Dr. Zimmerman tells Tracy that she's just one of a set of triplets—Tracy, Niki, and Barbara—and that he injected them with a formula that gave them superpowers. Tracy wants to know the name of the mysterious company that greenlit the project, and when Zimmerman can't remember she begins to freeze him, letting go of him before any permanent harm is done.

Soon after, Tracy tells Nathan that she's resigning from her position. Linderman informs him that it's his destiny to help her, which is why he arrives just in time to save Tracy from jumping off a bridge to her doom. As shocked as she is to see a man that can fly, it does help her open up and show him her ability to Nathan. The two kiss. In the future, the two are married making Tracy the First Lady.

In Africa, Matt puts on Usutu's headphones and starts dreaming of the future. He witnesses the destruction in Costa Verde, and also sees that Future Daphne had her back blown off in the massive explosion. He wakes up in Africa and realizes that he must find the speedster, but Usutu tells him he has to find a mystical animal spirit to guide him first. Matt thinks the turtle might do the trick, which is going to make for a very slow journey.

Hiro and Ando, now in a cell on Level 2, aren't getting along. Ando is angry that Hiro said he didn't need him, and Hiro is still freaked out that Future Ando killed him. The two team up for a moment to open up a vent in the ceiling of the prison cell so they can escape. After that, Ando refuses to go up but agrees to help Hiro up. Just as Hiro gets halfway into the vent, the Haitian shows up to rain on their parade.

As the episode comes to an end, Angela tells Hiro and Ando that the missing formula can grant people special abilities. After informing Hiro that some mysterious person is watching them and manipulating them, she tasks him to go dig up a very pissed off Adam Monroe for help. When the casket opens, Adam recovers and grabs Hiro in a stranglehold, and delivers the final words of the episode, "Hiro, you son of a b-".

"I killed my uncle once and now I have to kill him again, so let me be a human being for just one second."

"If you told me you were coming... I would have made extra!"

"Trying to teleport? Not with my friend here."

"Stop. I'd like a moment with my brother alone."

"Is this the President speaking, or my father?"

"I don't know a thing about watches!"

"If you wanna learn how to access my ability - FIX... the watch. Listen to it. Like a symphony, every piece has its part, all coming together in perfect harmony. If you can understand the complexities of a watch, you can understand anything - everything. Cause, effect... action, reaction... how to change the future."