Sylar is still at Isaac's loft painting the future, and visualizes that he will take Ted's powers to become the bomb that kills approximately half of NYC. Sylar then phones Mohinder for help, trying to understand why he would do such a thing. Rather than help him, Mohinder hurriedly attempts to call 911 on his cellphone while keeping Sylar on the line, but Sylar notices this with his enhanced hearing and hangs up. Sylar makes another call to an unknown person, who apparently agrees to meet with him.

At the Petrelli mansion, Peter tries to convice Claire to stay in New York to help stop the explosion; Claire mentions that Peter's potential exploding is like Ted Sprague's ability. Claire explains to Peter and Nathan about what happened with Ted in Odessa. Afterwards, with Claire and Peter out of earshot, Nathan calls Linderman and tells him that he thinks they have a problem.

In New York, Mohinder meets with Thompson, who convinces him to help Molly Walker, a girl whose parents were killed by Sylar. Molly has a blood disorder, the same one that killed Mohinder's sister Shanti, which prevents her from using her powers. Mohinder agrees to help Molly upon learning of her ability to locate any person, including Sylar.

Later, Nathan speaks with Thompson in his campaign office, and we briefly hear some of their discussion about Ted and the impending explosion. Nathan becomes upset about not being told everything and expresses his lack of conviction for Linderman's plan. Peter and Claire arrive to visit Nathan, but Claire sees Thompson through the shades and refuses to enter for fear of being caught. She explains to Peter that her adopted father, Mr. Bennet, used to worked for Thompson, and endangered himself so that she could escape.

As Sylar arrives at his destination, Hiro and Ando sneak around to a window to keep an eye on him. They are surprised to discover that the person Sylar is visiting is his mother, Virginia Gray, who seems happy to see him and is quite unaware of his recent activities. He decides to fix one of his father's old clocks, and his mother laments on how watchmaking is not a real profession; she suggests that he become an investment banker instead. He asks his mother to accept his desire to remain a normal watchmaker, but his mother refuses, saying she knows Sylar is special enough to be President if he wanted. Sylar decides to show his mother just how special he is by creating a snow globe combining his powers of cryokinesis and telekinesis. His mother is very impressed; but when he accidentally cuts her with one of the snow globes, she gets upset and locks herself in her bedroom.

Still outside, Hiro is again having doubts about killing Sylar. Ando succeeds in convincing Hiro to act now by showing him a page from the comic that Future Hiro had torn out: a page showing Ando being killed by Sylar. 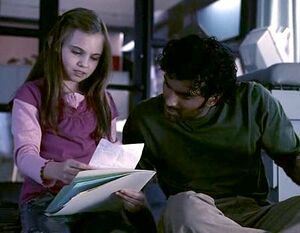 Peter follows Claire back to the Petrelli mansion, and stops her from leaving for Paris. He tells Claire he knows how she can save the world. Peter gives Claire a gun and asks her to use it to kill him if he ever gets out of control. He also shows Claire his sketchbook, containing drawings of the explosion and a picture Claire confirms to be Ted. Peter recognizes the location of the drawing.

At the Sanders' home in Las Vegas, D.L. discovers that Linderman has abducted Micah, and leaves for the Corinthian Casino in search of him. As he leaves, Niki, who is still being suppressed by Jessica, convinces her to accompany D.L. and protect him. The two go to Linderman's casino looking for Micah, phasing through walls until they appear in his private gallery. They discover that Linderman has been keeping tabs on their family for years through personal records and Isaac's paintings, and conclude that they are some sort of science experiment for Linderman. They also find that Linderman left for NYC and decide to follow him there to continue their search.

Meanwhile, Micah, who is being held in a skyrise building, discovers that Candice is impersonating his mom. He tries to escape, but Candice changes the appearance of the corridors such that he cannot find a way out. 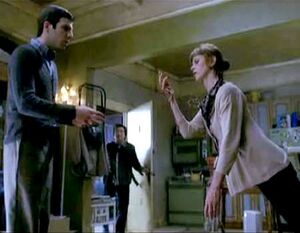 Back at Mrs. Gray's apartment, Sylar convinces his mother to leave her bedroom, but she orders him to leave the house, believing that he is "damned". She grabs a pair of scissors to defend herself as he tries to calm her, and is stabbed in the ensuing struggle. As she begins to fall, Hiro freezes time, enters the room prepares to kill Sylar; before he can deliver a killing blow, time resumes and Sylar catches the sword in his hand. Sylar orders Hiro to kill him, but senses his hesitation and threatens to kill Hiro instead, freezing the sword as he speaks. Just then, Ando bursts through the door, distracting Sylar long enough for Hiro to teleport them both back to Isaac's apartment. It is only then that the two notice that Hiro's sword had snapped in two during the encounter. At the Grays' home, Sylar reacts in shock to his mother's death; he then uses her blood to make a mural of the explosion on the ground using Isaac's precognition, rambling about "being special" and the presidency, foreshadowing the events of the future Hiro experienced. 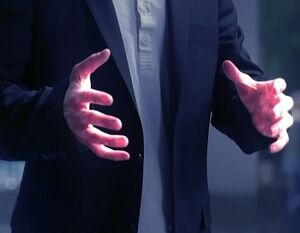 "Mom you're not even listening to me!"

"Because if we save ourselves, who's going to to save everyone else?"