Hiro tells Ando that fourteen years ago, the fortune teller at the Sullivan Bros. Carnival set his fate so he would be a hero. He wishes he could go back and stop the younger Hiro from visiting her.

Hiro goes back in time so he can change his current fate, but decides to not change his future. Young Hiro receives his fortune from the fortune teller and then yells, "Yatta!"

The fortune teller tells Hiro that he will become a brave and powerful hero, and escorts him out of her carnival tent. Edgar sneaks up and steals her crystal ball, and she screams at him to come back. She and Samuel confront Edgar and Lydia, and Edgar calls her a old hag, prompting Samuel to slap him. He says that all is not as it seems, and the fortune teller takes off her hood and eye patch, revealing a young woman beneath. She tells them she does not want the crystal ball back, as it is now ruined. Lydia says it's fine, and that they saw things in it, but the fortune teller tells her it was a prop, and what they saw is Lydia's power, not hers, leaving her to ponder what she has seen. 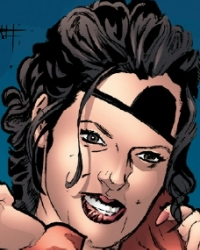 The fortune teller as she appears in graphic novel form.
Retrieved from "https://heroeswiki.ddns.net/index.php?title=Fortune_teller&oldid=50954"
Categories: