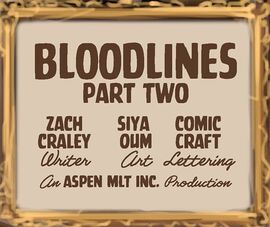 In 1961, Adam wakes up Arnold and comments on the fall he had. He asks Arnold what his name is and Arnold says that he cannot remember a thing. He then begins to live a new life as Ernie Crum, a chef a Lila Mae's. The day after the storm in May, 1961, Adam visits Arnold and asks if he has remembered anything. Arnold notices the tears in Adam's uniform and wonders what has happened. Adam simply wishes Arnold the best before he leaves.

In present time, Joseph, Samuel and Lydia stroll through the carnival and Joseph tells the other carnies to finish packing. Samuel wonders if they should be leaving and Joseph reminds him that they do not leave family behind. The three of them go to a home and find a now elderly Arnold sitting alone. Arnold tells them about his life and how he lost his memory but then reveals that he now remembers everything about who they are and what they can do. He asks for their help in finding his son Mel and agrees to return home. Joseph and Lydia use Lydia's empathy to try and find Arnold's son, but a tear-stricken Lydia reveals to Joseph that Mel was killed by Emile Danko. Both Lydia and Joseph agree not to tell Samuel about Danko.

Later, Joseph meets with Danko and finishes telling him about his family. Danko is amazed that so many evolved humans are in one place and Joseph reminds him that he can only take his brother. He gives Danko a compass and tells him he's going to need an evolved human to make it work. Later, after Samuel has Arnold kidnap Charlie, the two of them meet in Arnold's trailer. Arnold, bleeding from his nose and ears, comments that nobody deserves a fate like the one that Charlie received and Samuel wonders if that is true. Arnold reveals that he remembers why he traveled to the past - because Joseph wanted him to kill Samuel. Samuel reacts badly and murders Arnold by strangling him with his tube. Samuel then visits Joseph's grave and tells him to wait and see what will happen...