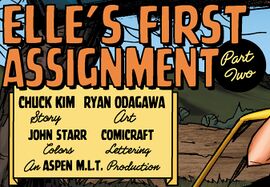 Elle knocks on the front door of Zach's house and he answers, asking Elle who she is. She invites herself in and tells him her name is Cindy-- she's in his fourth period English class and he told her he'd let her copy his notes. Zach doesn't recall that ever happening, but Elle ignores him and checks to see if Zach's parents are home. After asking for the tape and submitting to the fact flirting with Zach is futile, she resorts to threatening him with a ball of electricity. Unfortunately, before Elle can use it, Noah comes in and pistol whips Elle, knocking her out.

On Day 27 of her assignment, Elle sits in social studies class and ponders what else she could be doing that was more important. Claire turns to Zach and asks who the blonde that looks like she wants to kill her is, but Zach says he's never seen her before. Elle reminds herself her dad said Claire might not even have an ability, so if she doesn't manifest by the end of the week, the assignment was canceled. Elle thinks this is fantastic, because if she had to attend homecoming, she might have to shoot herself.