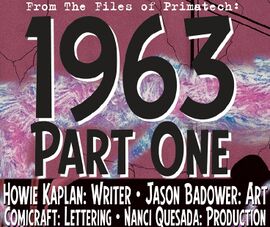 In 1963, Chris Coolidge performs at Uncle Ira's in Greenwich Village, playing his guitar and singing a rather terrible song. In the crowd, young Angela Petrelli, Bob Bishop, Daniel Linderman and Charles Deveaux listen to him and wonder why Angela's dream led them to Chris. Angela reminds them that her dreams are not always easy to understand and they wonder how Chris can be so good while being so bad. Chris finishes his first song and starts another, pleasing his crowd.

A young Kaito Nakamura asks Angela to dance, and Charles translates for him. Bob also goes to dance with a woman and Chris's song is interrupted by the arrival of the police. Everything stops and the police ask people to leave, as the concert is over capacity. Chris tells them to stop and a fight ensues. Angry, Chris sends out a sound blast, saying that he will start a riot. Angela notices what is happening and "expresses her displeasure".