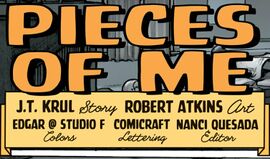 Asleep in his apartment, Ryan Covington is visited in his dreams by Sanjog Iyer. The two discuss the connection between dreams and reality, Ryan asking Sanjog if he has the answers to the questions that his recurring dreams present. Sanjog suddenly disappears and a large castle appears in his place. Ryan reluctantly enters and immediately hears a disembodied voice calling his name. He heads upstairs, the voice getting quieter the higher he climbs, and he sees large stained-glass windows depicting various events in his life--his birth, a game of baseball, him making love with his girlfriend, a car crash, and his girlfriend's funeral. The window changes to a mirror and Ryan's reflection smirks as it reaches out to Ryan, pulling him through the window and causing him to fall to what is normally his instantaneous death. However, in this dream, he survives, believes that Freud was an idiot. Sanjog Iyer appears and tells him that dreams are not the focal point of our existence, and that what happens in dreams should remain there. Once more questioning the connection between dreams and reality, Ryan awakens with a stir and draws the curtains back in his apartment, remembering Sanjog's final words in the dream--"Focus on what matters most... the life you still have."