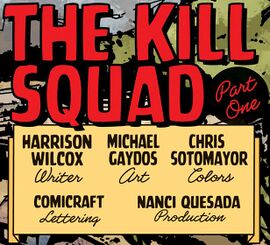 Sean Fallon and his team accompany Donna Dunlap and Thompson, Jr. on a mission to bag and tag a plant manipulator named Lewis. While Donna and Thompson Jr. investigate more closely, Fallon and the team discuss their pasts in the Company. Rosetti, tired of Noah Bennet's cloak-and-dagger tactics, feels relieved to use real military force. Tom Drake, a Company veteran, says that he ran missions under Ivan Spektor. Fallon was originally a United States Navy SEAL before he was "outsourced to the private sector" and worked security at Linderman's casino. He considers the moral ambiguity of his past actions in the Company which included helping Bennet break into Chandra Suresh's Madras apartment and disposing of Eden McCain's body. Fallon also had a relationship with Candice, who used her illusion powers to grant him relief from the guilt he felt at his actions. However, their relationship ended when Candice was killed by Sylar. A team member says that he was stationed under Yamagato before his current detail, spending his time stateside to watch over Kaito Nakamura's son. The team's reminiscing is cut short by an explosion near a train depot. Running to help Donna and Thompson, the team finds the two agents on the ground while Lewis, roots protruding from his body, stands over them.