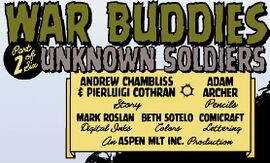 Examining the file she obtained in the Pentagon archives, Hana Gitelman reads a report about a covert mission during the war in Vietnam in 1968. Five soldiers give up their identities and personal effects to ensure plausible deniability should the mission fail. The soldiers take on codenames: Dallas, the report's author; Loredo, a demolitions expert; San Antonio, a communications officer; Amarillo, a gunboat pilot; and Austin, a medic.

The soldiers proceed down the Mekong in a gunboat. Loredo catches Austin with an unauthorized personal item and threatens to throw him overboard, but Dallas refuses to make an issue out of it, confessing that he, too, has an unauthorized item: a letter from home. At that moment, the soldiers are attacked by Viet Cong scouts. Dallas is shot in the abdomen, Loredo is taken out by a sniper's headshot, and Amarillo and San Antonio are killed. After the engagement, only Dallas and Austin remain alive, and Dallas is badly wounded. Austin lays his hands on the wound, and it is instantly completely healed.