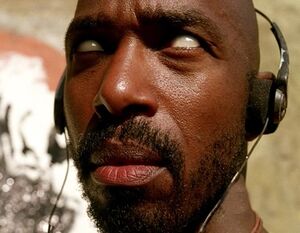 Ryan Stewart: Where are you from?

Ntare Mwine: My family is originally from Uganda. I was born in New Hampshire and grew up for the most part in the States.

How did you get into acting?

That's a good question. "How does acting get into you?" is the question, really. I guess I could blame my parents. Somehow they created an artist, and one of the outlets was acting. I started by doing stuff like school plays in primary school and through college. It has been a long walk.

You've lived quite the life, haven't you?

You had another role on Heroes two years ago.

Yeah, I was really fortunate to be in the pilot. But as you know, the storyline changed, and that whole plot went to the cutting room floor. But it's great to be able to come back for this role.

Can you tell me about the character you used to play in the pilot?

It's almost the opposite of what I'm playing now! He was almost like the head of this terrorist cell--a really bad guy. He was plotting a terrorist attack. What they did was they kept all the footage that was shot for the terrorist attack, and just used it for the train wreck scene [in Genesis]. It was re-edited.

And your character was the head of the terrorist organization. 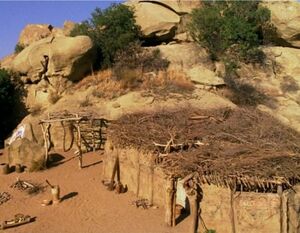 As far as I recall. It's been a few years.

And Tim Kring called you back to play the painter?

I'm not sure if it was officially Tim who made the call or if it was the casting department. I still had to go and audition just like before.

It sure is a testament to your acting abilities that you were able to play such diverse characters.

It's been a great opportunity.

Why don't you tell me your take on the character you play now.

Usutu is basically at the opposite end of the spectrum as Joseph. He is sort of serving as a spiritual guide for the characters he has interacted with so far. Maybe it's best to quote Tim Kring. I asked him how he saw the character, and he said he saw him as a Yoda-like figure. That actually gave me a lot of insight as to how he saw the character and the role he plays in terms of heroes and villains. He is one who tries to pull people to him for the forces of good.

Thank goodness you speak in full sentences as opposed to Yoda!

Yes, exactly! [laughs] Actually, in the original script of the first episode Usutu appeared in, he was speaking Yoda-like. He wasn't speaking in full sentences and some of his words were backwards. I don't know why they changed it, but that's how the first draft was.

Tell me a bit about the character's ability.

Well, one of the things is that he can paint the future. But, as we saw a little with Matt, is that he's able to enable others to [see] the future or to tap into their higher selves. I think that's one of the things with Masi's character Hiro--[Usutu] is challenging [Hiro and Ando] to exercise other muscles in their own selves that they haven't really used before, or that have atrophied.

How does he go about doing this?

He has quite a few arsenals. [laughs] One of them is the paste that he feeds them. Another is the headphones he puts people in. There's a walk that happens. A totem that people find. There's several different ways which he helps them reach their higher selves. 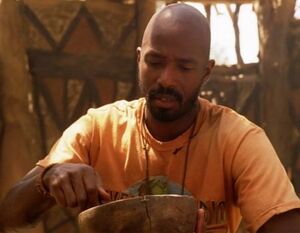 It has hyena dung and is an old family recipe. If there's any behind the scenes peeks I can give you, I can say that Greg was a trooper. He really dug into the paste. But Masi was the other extreme. He was like, "I need a spittoon!" [laughs]

They were regular headphones, but when we shot the scenes, there was no music on the headphones. I don't even know if there were batteries in the Walkman! [laughs] But I talked with the writer on that episode and I asked him what he thought should be played on the headset. When they played the actual tape when the show aired, I couldn't exactly pick out what it was. But he originally envisioned Toto or something like their song "Africa". [laughs] He had to confess to me that he actually had no African music in his personal collection, and he asked me what I thought should be on the tape.

How exactly does the music help somebody else to see the future?

That's a great question! Religions have been trying to figure that out every day when they have mass and sing songs, but I'm not sure I have the answer. Music does play such an integral role in elevating the spirit. When you elevate the spirit, you go into some other realm, whether you call it the future or some ideal state. In that sense, music serves that same purpose in this world.

So many of Usutu's paintings focus on Matt Parkman. Why is that?

At first, they all had to do with Matt. We see that he is focused on Matt. When he meets Matt, he reveals that he's painted him his childhood. Then when he meets Hiro, we discover that there are other paintings as well.

Did you ever meet Tim Sale, the artist responsible for the paintings?

No, I didn't. I met some of his helpers who were on set, but I didn't get a chance to meet him. 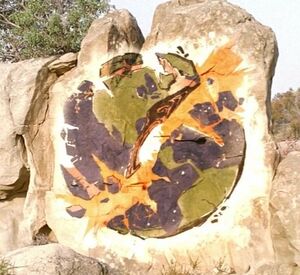 How did they put the paintings on the rocks?

They actually have a canvas which they paint on, and then they mount it to the rock. Then they had a little "rock makeup," I guess, to blend it in to the rock. They didn't paint right on the rock. Some of them used a stencil of sorts to put on the wall. But the big rock ones were actually on a type of canvas.

So they're not painted on the actual rocks?

That's all right, I'll get over it! [both laugh] I wanted to ask you whether or not Usutu has a totem, like Matt's turtle.

That's a good question! I actually got this book (and this is a shameless plug for the book, but I find it really funny). It's The Book of Animal Ignorance: Everything You Think You Know Is Wrong by John Lloyd and John Mitchinson. It's about all these different animals and perspectives you never really knew about or thought about. I've been going through it, but I haven't found out what might be Usutu's spirit animal. But if I find one that fits, I'll definitely let you know.

Do you have one?

Is there anything else you'd like to say about your experience with Heroes?

It's been a lot of fun. It's rare that you get to be in the pilot episode of a show and then come back as a different character altogether. I'm really grateful for that. I'm not sure how long the ride will last, but I'm having fun!

Have you followed the show from the time you were on it until now?

One of the things I probably do have in common with Usutu is that I don't have cable. I only just got my cable hooked up about four weeks ago, when the season started, so I wouldn't have to bother my friends going over to watch the episodes. 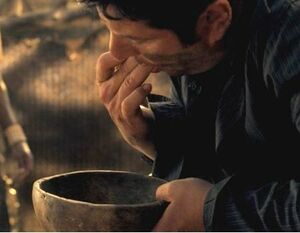 So you started fresh when you began as Usutu. What a blessing.

Yes, I started fresh, but I don't know if it was a blessing. They say ignorance is bliss.

What else can we expect from Usutu in the near future?

I'm not sure what's going to happen with Usutu. I don't know what to say without spoiling anything....I don't know how long I'll continue to be part of the show. It's hard to talk about stuff without giving things away.

Well, I think I speak for the fans when I say that we enjoy Usutu when he's onscreen, and we look forward to seeing what else his character has in store.

I know the audience has really played a big role in terms of helping the writers figure out [their direction]. They listen to the audience. So that's great--if you guys like him, maybe he'll come back and continue!

Let's hope so. Thank you, Ntare.