Joseph Sullivan is Samuel Sullivan's late brother. Joseph became increasingly disturbed by Samuel's thirst for power and tried everything he could to stop him, even going as far as sending Arnold back in time to kill him. Ultimately, Joseph was murdered by Samuel after his younger brother found out about his betrayal. He was also an evolved human with the ability to cause others to lose control of their abilities and render them unconscious. 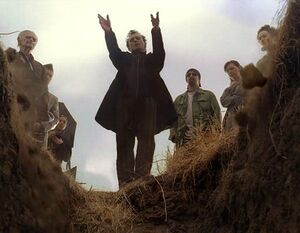 Joseph is being buried

Several members of the Sullivan Bros. Carnival attend Joseph Sullivan's funeral. They listen as Samuel Sullivan offers the eulogy, and explains how he and Joseph belonged to two families, though the first one didn't work out. Samuel throws a compass into his brother's grave, covers it with dirt, and tells Joseph to find his way home.

Fourteen years ago, Samuel worries what Joseph would think if he heard Edgar call the fortune teller a hag.

Samuel admits to Lydia that since Joseph's death, Samuel has felt directionless without his compass. Later, Samuel tells Peter that he's in town to deal with legal matters brought on by Joseph's death and that he can't deal with them while he's suffering from a dislocated arm. Later, Samuel meets with Peter and talks about Joseph's death. Samuel asks Peter if he's ever lost a brother. Peter admits that no one can understand the suffering of someone who has lost a close relative unless they also have lost someone. Later, Samuel goes to a large manor and tells a woman that he and Joseph grew up on that property, and now that Joseph has died, Samuel would like to visit again.

Edgar is sent by Samuel to retrieve Joseph's compass from Danko. Samuel also instructs Edgar to kill Danko because it is want Joseph would have wanted.

Edgar tells Lydia that he believes Joseph would have never allowed Samuel to bring in so many new additions to "the family".

While the carnival is seated to breakfast, one seat remains unoccupied. This seat previously belonged to Joseph. Samuel comments that Joseph's "replacement" will be with them soon.

According to Samuel, Joseph was killed by Danko which is part of the reason Samuel sent Edgar to kill him.

Lydia remembers when Joseph welcomed her to the Sullivan Bros. Carnival, and how Samuel told him that if she stays, she needed to earn her keep. He replies that she needs understanding first.

Eight weeks in the past, Mohinder locates the carnival using a compass that he has built from his father's equations. He meets Joseph as he counts the carnival's profits. Joseph takes him to his trailer and they meet Samuel coming out. Joseph claims that Mohinder is there to write a book on traveling carnies and sends Samuel to help the others. Once he believes his younger brother is gone, Joseph explains to Mohinder that his mother explained how Samuel could amplify his abilities by surrounding himself with more evolved humans. Joseph has spent the last 40 years limiting Samuel's power by keeping as few evolved humans around him as possible. When Mohinder wonders how he can trust Joseph, Joseph insists that he's handled the problem fine and doesn't need Mohinder's intervention. He tells Mohinder to burn the film and leave. 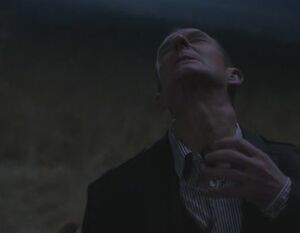 Joseph is killed by his own brother

Growing suspicious, Lydia has Hiro take her eight weeks into the past in order to see Joseph's death at Danko's hands. Eight weeks in the past, after Mohinder leaves, Samuel confronts Joseph about what he overheard and Joseph tells him to meet him later. In a field of tall grass, Samuel and Joseph meet with Hiro and Lydia secretly watching nearby. Joseph tells Samuel about how his power is able to be amplified but refuses to explain how and says he told Mohinder to burn the film explaining it. Joseph says that amplified, Samuel's power has the potential to level cities and mountains and he has given up his whole life to keep Samuel from achieving that power and indicates that his current life is not the one he wants. Joseph also reveals that he called in Danko to take Samuel away and gave him a compass in order to be able to find him. In anger, Samuel propels a rock through Joseph's throat, mortally wounding him. Samuel holds him as he dies, regretful and remorseful for his action as he didn't mean to kill his brother. He later blames Joseph's death on Danko. Hiro and Lydia are nearly caught by Samuel, but Hiro manages to teleport them back to the present in the nick of time after a lot of effort.

In the present, Lydia becomes determined to stop Samuel and reveals the truth to Edgar. A suspicious Samuel now accuses Edgar of Joseph's murder and and tries to kill him, but Hiro saves him and helps him get away.

At Joseph's grave, Samuel says in his speech that his brother had the right idea.

Tracy tells Eli that his family at the carnival wants him. She says that Samuel is expecting him. He starts to listen, realizing that Samuel is in charge instead of Joseph. Eli tells Tracy that he and Samuel always saw eye to eye and Joseph was the one who exiled him from the carnival.

Joseph goes to talk with Eli, who teases him by asking "which one?". Joseph tells Eli not to mess with him, as he knows that he can tell them apart. He tells Eli that Caleb told him that Eli had been stealing from locals, calling him a scrounger and saying that he has no place in the carnival. He goes to see Samuel, who is about to kill a pig and tells him not to look at him like that, as it's not like he's a murderer, commenting that "everyone loves a Christmas ham".

Later, Arnold arrives to see Joseph, who asks him about his headaches. He tells him that he trusts him and that he regards him as a "brother", and explains his concerns about Samuel. He shows him a picture of Coyote Sands and asks if he has heard of it. Joseph explains what Coyote Sands was. Arnold asks if Joseph wants him to go back there. The next day, Lydia asks where Arnold is, and Joseph says he has some work to attend to. He then asks Edgar to carve the meat. Joseph tells Samuel that he fears that something has happened to Arnold, stating that usually he's gone and back in a blink. He then tells Samuel that he needs Lydia to find him. They go to see her, and Samuel creates a tattoo of Arnold on her back. She tells them that Arnold isn't missing in the past, that he's in the present day.

Joseph, Lydia and Samuel go through the carnival and Joseph tells the other carnies to finish getting ready to leave. When Samuel questions why they have to leave so early, Joseph reminds him that they do not leave family behind. The three of them then go to visit an elderly man, who introduces himself as Ernie Crum. Joseph gently reminds him of his real name, Arnold, and the man remembers everything he had forgotten. Joseph tells his old friend not to worry and Arnold asks them if they can help him find his son Mel. Joseph and Lydia team up and use Lydia's power to discover that Mel has been killed by Emile Danko. Joseph then compliments Lydia, calling her a wonderful person. He asks her not to tell Samuel about their little teamwork and Lydia agrees, saying that he would get jealous.

Later, Joseph meets with Danko and tells him about the carnival. Danko is surprised at this information and Joseph gives him a compass so that he can find them. Joseph reminds him that he can only take Samuel and Danko says that the deal will stand for now. After Joseph's death, and after the abduction of Charlie, Arnold tells Samuel that Joseph wanted him dead.

Joseph talks with Eric about abilities and how they can be good, it just depends on who has them. He tells Eric that his ability could come in handy with Samuel. 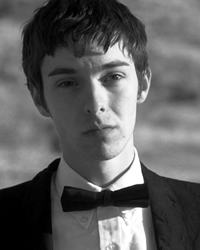 Edgar says to Noah that he was exiled after he learned that Samuel killed Joseph.

Lydia tells Amanda that Samuel had mentioned someone who may be the new Joseph.

Samuel states that everybody sees Lydia as the empath to replace Joseph.

Samuel mentions that his brother, Joseph, told him Samuel could move mountains and cities.

While Samuel and Peter battle, Samuel states that Joseph kept his potential down.

In chapter 1 of Slow Burn, Lydia tells Gail that ever since Joseph died, Samuel has been trying to "fill that void".

In an optional ending for chapter 2 of The Puppet Master, Joseph comes to Lydia's trailer to help Samuel, who is under Eric Doyle's control. Joseph uses his ability to free his brother from Eric's hold and knock Doyle out.

Jacob Kurtzberg, the lawyer representing the Sullivan Bros. Carnival, is morally certain that Samuel killed Joseph. Despite this, he still wants to break Samuel out, because that is his job and there is no evidence that Samuel actually killed Joseph.

Joseph had the ability to control emotions. Once, he used this ability on Eric Doyle, which caused Doyle to stop using his own ability, and ultimately rendered Doyle unconscious. (The Puppet Master)

Please refer to Theory:Joseph Sullivan for fan-created theories and other speculation.