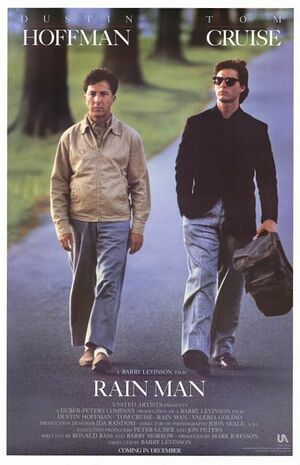 Rain Man is a 1988 film starring actors Dustin Hoffman and Tom Cruise. The movie won numerous awards, including the Academy Awards for Best Actor in a Leading Role (Dustin Hoffman) and Best Picture.

After the death of his father, selfish Charlie Babbitt (Cruise) finds that his father's fortune was left to his autistic savant brother Raymond (Hoffman). Charlie decides that he will take custody of his brother, but first he must take Raymond to California. What follows is a cross-country road trip, character growth, and a realization that money is not the only important thing in life.

When Ando learns that Hiro can stop time and manipulate the results of the games at the Montecito Casino, they go on a profitable cheating spree. In one scene, Hiro and Ando descent an escalator in fine grey suits; this mirrors a scene in Rain Man when Charlie realizes that Raymond can "count cards" and they use his ability to win a lot of money.