From Heroes Wiki
< Talk:List of evolved humans
Jump to navigation Jump to search

If we get rid of the actor column (which is out-of-world info in an in-world article), and merge the status column with the name (i.e. "Brian Davis (deceased)", then we can get rid of the cryptic codes in the source column and opt for things like "The List", "The Map", "The Journal". Thoughts?--Hardvice (talk) 02:10, 28 March 2007 (EDT)

The "deceased" reflexes are automatic, and allow for either just a "deceased" notation (like Felipe Acerra) or a link to Sylar's victims (like Charlie). The links for powers, names, and locations are also automatic. See Template:Evolved for a rundown of how it works. Having a template will also allow us to make major changes to the formatting of the table with minimal adjustments to the template itself, so we should probably switch to a template even if we keep the current layout.--Hardvice (talk) 02:39, 28 March 2007 (EDT)

Great changes. I, for one, am so glad to see the actor's name removed from this list...I find the parenthetical "(deceased)" note a bit superfluous. If the name is italicized, that should be enough. Maybe have a note at the top that says "Names in italics represent deceased characters". — RyanGibsonStewart (talk) 07:06, 28 March 2007 (EDT)

That's fine. Personally, I think the italics stand out enough, but if you don't, then can leave the "deceased" on there. I don't think striking them out would be a good idea since it kind of gives the impression that they don't even belong on the list. — RyanGibsonStewart (talk) 07:21, 28 March 2007 (EDT)

Well that's up to, I didn't thought about that face of the striking thing and I agree but I still believe that italic isn't enough. I mean, when they were in red, it was clear who was or wasn't alive, but italic isn't fast as red to detect. That's just my point of view and I don't think it should be considered as a consensus :) What do you think of something like that, using the ascii cross alt+0134 :

Currently "Chandra's journal entries" are out of sequence and "Amid Halebi"'s note may not be needed anymore. I was going to change them but was wondering if there was a better way. Would it be possible to use footnotes like at Wikipedia? Would this require a plugin or is it a template? -Lөvөl 13:02, 29 March 2007 (EDT)

We need some clarification on this section. First, is it a birthplace or last known location? Since our heroes are moving around the country/world throughout the series, I think the location to refer to a permanent residence of sorts. For example, Hiro resides in Tokyo, was born in Osaka, and is currently in New York. I think Tokyo would be the correct location to place. Hana resides in Montana, though she's been all over the place lately. So, I think we should stick with what people would consider "home" for location: the location of their main domicile.--Bob 17:44, 3 May 2007 (EDT)

Historically, this page has been an all-inclusive listing of Canon (Episodes) and Near-Canon (GNs, Heroes 360, Journal). I just found today, that the Heroes 360 AE site has a new Mailbag tab, (that is uneditable by the public unlike the AE wiki), that lists two new people with evolved powers that should probably be listed on this page for documentation. (Rick H., and Matt S.) Perhaps we should bust this page out into two lists, a confirmed primary canon list, and a suspect/secondary canon list....I'm not sure if that is best or not. But if we only hold this page as a list of primary canon only, we would have to remove alot of people from it. I think it best serves the Heroes community as an all-inclusive resource list for documentation; not one that is too scrutinized so that it only contains primary canon sources.

This page, is the most inclusive and fully documented list that exists that I am aware of, from all Heroes sites, for documenting Evolved Humans, or possible/suspected evolved humans. I would hate to see it diminish instead of grow.

Regardless, we should probably update the leading paragraph of this page explaining the 'canon' criteria, and linking to the Canon page so others will be clear on the inclusion rules. --HiroDynoSlayer (talk) 06/26/2007 16:28 (EST)

I have my own list that was made before I knew about this. It only has named people and as IO state at the beginning, I've made my own personal guesses (i.e. David Berman was killed my Sylar) so please don't edit it, it's for my use and I'll just get rid of it later. Therequiembellishere 03:46, 20 November 2007 (EST)

No, I make the Petrelli's more of a family. :-) Because I'm sure you have every thing perfect in your infinite knowledge of the show. Therequiembellishere 18:19, 19 February 2008 (EST)

Suspected by the Company?

Why are these in a separate list? We have had others who have been mentioned as having a power but they never demonstrated it, like Khufu and the Middle school boy. What makes these different? If you want them differentiated add a footnote or something. -Lөvөl 03:10, 22 May 2008 (EDT)

The German's Assignment Tracker profile says "the subject was a posthuman capable of manipulating metal" so apparently we now have an explicit term to refer to those who have special abilities. Should we change all instances of "evolved human" to "posthuman"?--Referos 13:55, 15 July 2008 (EDT)

Anyway, after searching a bit to see where the term "evolved human" originated, I've found (more like unearthed, actually) the following comment from Ryan in the archive of the empathic mimicry discussion, dating from 1/30/07:

[...]Metahuman is not a real word (though it makes a lot of sense). Here at Heroes Wiki, we've been using "evolved humans". It's all made up by fans, anyway. And we need to remember that Tim Kring has made it very public that he is not a "comic book guy", and purposely stays away from the genre so he remains unaffected by popular comic book themes and ideas. - RyanGibsonStewart (talk) 17:35, 30 January 2007 (EST)

Which means "evolved human" is a fan-term, so, unless someone remembers seeing it in an episode from Season Two, we should stick to "posthuman". Or maybe I'm missing something?--Referos 10:39, 26 July 2008 (EDT)

My take: Evolved Human is a fan created term constructed from a level 1 canon source, Mohinder's lecture. Posthuman is a Level 2 canon term, coined and in use by the Company, one of the leading experts in these people. In my opinion, explicitly named terms should always trump constructed terms, regardless of the source for the terms in question. --SacValleyDweller (talk) 21:49, 27 July 2008 (EDT)

My last thought is that we should wait to see if the word posthuman is used again. If it is, then we should definitely change it. Jason Garrick 23:19, 27 July 2008 (EDT)

I've found something: a near-canon source is contradicting another near-canon source! According to Bridget Bailey's first email, Chandra used the term "evolved human" is his book Activating Evolution. Yes, Bridget was created by BBC, but since she was "adopted" by NBC we have considered her canon. I suppose we should just ignore "posthuman" for now.--Referos 21:21, 30 July 2008 (EDT)

I don't have access to this new interactive map (which I'm assuming is in the assignment tracker page mentioned by evsdropr last night). Can somebody either upload an image of it, or just let me know the contents? It would certainly help me be better informed on the above discussion. Thanks! -- RyanGibsonStewart (talk) 10:10, 6 August 2008 (EDT)

Felipe Acerra, Byron Bevington, Penkala Burton, Tracy Chobham, Pam Green, Adam Soo Hoo and Michelle Valcek all have their own pages. Some people think that they should be delted. I think they should all be put onto one page, seen here. --Skywalkerrbf 07:39, 14 August 2008 (EDT)

Can Wiki do a "Counter"?

Not sure if Wiki can do a counter, but it would be nice in the confirmed/unconfirmed table at the top, if we could have a auto-counter that told us how many EHs we have catalogued. --HiroDynoSlayer (talk) 08/14/2008 10:06 (EST)

Would it be useful to have the table sortable? I have made a template that would allow it here: User:Level/Evolved. Some entries would have to be fixed and we may have to use some hidden sort codes for the name of some of them. -Lөvөl 14:47, 14 August 2008 (EDT)

Has anybody noticed Jesse Murphy's file in the season 3 promo next to Knox's file? Maybe he is not deceased but prisoned in a level 5 cell. Check out the snapshot I took. 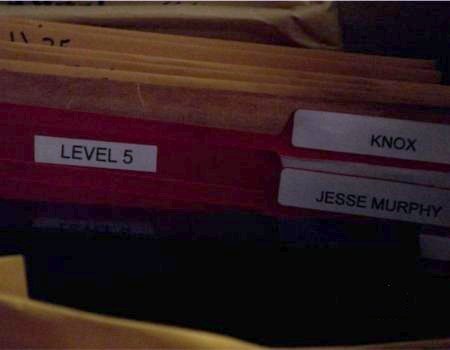 Those who have powers gained through a formula like the one Mohinder has or the one The Company has should be listed seperately from the truly Evolved Humans. They are not evolved they are merely enhanced through science. --Snow Leapord 21:49, 22 September 2008 (EDT)

Anyone with half a brain who has watched the show would know that. You have to assume a level of intelligence, and not state the obvious. When someone proves themselves that retarded then point it out. --Snow Leapord 23:10, 22 September 2008 (EDT)

speculation...needs fixing but I don't know how

At what point would it be the right time to add Samedi? When he first appears on the show or in a graphic novel? Now since we know who will be playing him? After it has been spoiled what power he has? --Snow Leapord 13:13, 29 October 2008 (EDT)

Am I the only one who believes that there be a page about WHAT an evolved human is? Something that shows what makes an evolved human (lineage/eclipse/formula) and things that have meaning to E.H.'s (helix symbol/eclipse). We have pages for basically every aspect of E.H.'s but I think it would be good to have a page that groups everything together and has links to the other articles. Am I alone in this opinion? -- Elemental Manipulator [ U | T | C ] - When in doubt, ask BTE 02:24, 16 December 2008 (EST)