Perhaps this ability could be summarized as "florakinesis," as it involves an influence over plant movements as well as plant mimicry.--Jeffrey the Red (talk) 19:10, 15 July 2008 (EDT)

Sounds reasonable. The only problem I have with that is that Thomson Jr. believed that some of the plants growing in the area were caused by Lewis' presence, and yet were not Lewis himself (The Kill Squad, Part 1).--Jeffrey the Red (talk) 20:48, 15 July 2008 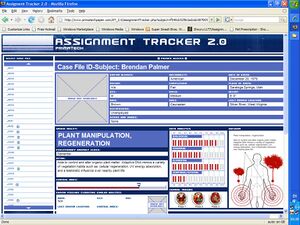 You need firefox to see this

User:Shadowulf1 14:27, 2 August 2008 (EDT)Isn't it possible that he has numerous powers: the ability to manipulate plants (Agrokinesis) as well as the ability to mimic plant-like properties himself (Plant Mimicry)? Couldn't both be exhibited in one evolved human, or would that break the "one human, one ability" rule that I've never heard of?