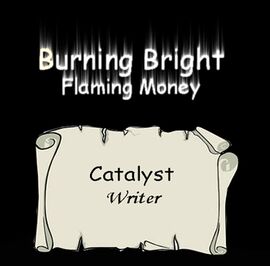 Tommy and his two friends, Davie and Ford entered a bank acted normal standing in the line to cash in money. When it was their turn the woman asked, "Hi, how can I help you?" Tommy replied by pointing his gun at her, while Ford gave her a bag. Tommy smiled while saying "You could help by putting the money in this bag."

Davie and Ford pulled out their guns and shot at the ceiling. "Everyone down now!", Davie yelled out. So everyone got down on the floor. Ford went around with another bag, collecting the money and jewels of the people. When a man refused to give Ford his ring, Ford grabbed on to him. When he did, a green light sparked. Ford quickly let go when he felt and saw that. He hit the man and took of the ring himself.

When they were done, they left the bank. But right outside were a few police cars. "Holy crap" said Tommy calmly, but also nervously. As Davie and Ford dropped the bags, and put their hands up, Tommy pulled out a small machine gun, and started firing. "What the hell are you doing?!" yelled Ford. "I'm saving our asses." Now grab the bags, run, I'll keep shooting. They ran to the nearest police car and beat the cops next to it. They hopped in and started driving. Tommy yelled in excitement, while driving and looking at money, "Wooh! We're on fire!" Suddenly, one of the cops fired a rifle. The bullet went through the back wind shield, through the front passenger seat, hitting Davie in the back. Davie screamed out in pain, "HOLY SHI-- DUDE!!!"

- Tommy (looking at all the cop cars)

- Tommy (excited about his theft and money)