Nirand is a colleague of Chandra's and Mohinder's at Chennai University in Madras, India, and he is an evolved human who has the power of Invisibility. 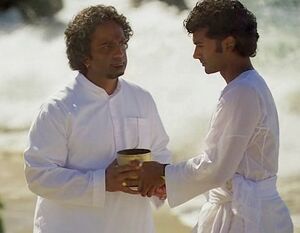 Nirand with Mohinder at Chandra's funeral

Nirand and Mohinder talk after Chandra's funeral. He tells Mohinder that he hasn't canceled his classes for the new semester, and that he can have his father's old office if he likes. When he sees Mira, he suggests that there may be more for Mohinder in India than just a job.

Mohinder and Nirand discuss the dreams Mohinder has been having. Nirand remains skeptical and claims they were simply dreams, citing Freud as support. Mohinder tells him that in the dreams, they were discussing the sister he never knew he had. He shows Nirand Sanjog's file, including the part about the boy entering others' dreams.

Mohinder and Nirand attempt to locate Sanjog Iyer. Eventually, a man directs them to Sanjog, who is playing with a soccer ball with a group of other kids. Mohinder approaches Sanjog and asks about the dreams, hoping the boy can tell him what to do, but Sanjog merely tells him he already knows the answer.

Back in Chandra's office, Mohinder has another dream, in which he sees his father trying to persuade Nirand about Sanjog's abilities ... just as he himself had done earlier. Again, Nirand cites Freud in his argument that Sanjog is merely a manifestation of the subconscious.

Nirand teams up with Mr. Thompson and captures Flint Gordon, Jr. in an alley invisibly.