Daniella "Dani" Parkman is a version of Daniella Parkman in the The World Entire universe. She is Special and the daughter of Matt Parkman and Daphne Parkman. She is a counselor with Primatech Hartsdale. 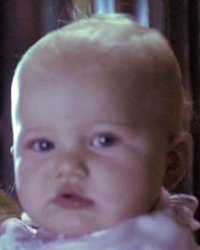 Daniella is just a baby.

Daniella is hysterical when her mother is dying, even though big sister Molly is trying to comfort her. Later, the President offers her father the best child care service for her if he joins Pinehearst. Daniella then disappears for several days and even Molly is not able to find her. It turns out that Daphne had healed completely and rescued her from day care and was with her the entire time. After the Epidemic, Daniella goes home with her family, and Molly reports that Daniella has manifested her ability.

In 2029, Daniella is working for the Company at Hartsdale as a counselor. Upon seeing Noah Gray walking a Company corridor, Daniella happily embraces him in a hug and casually gives him a kiss on the cheek. She then sees her sister and rushes up to her and gives her a big hug, before briefly resting on Molly's shoulder. Molly re-introduces Daniella to Peter Petrelli and Claire Bennet, whom Daniella proceeds to greet just as she did with Molly and Noah. Daniella then notices Hannah Petrelli, and laments on how much she has grown since she last saw her. Daniella then sees Andrew and quickly rushes after him, briefly stopping to remind Molly that she loves her. Molly explains Daniella 's ability and the fact that everyone seems like a best friend to her. Daniella later sits and speaks with her brother but cuts their conversation short in order to hug and speak with Savannah Lemay.

Dani later listens as Hannah expresses her desire to learn more about her mother. Dani cheerfully states "You don't feel happy, you should feel happy" and instantly, due to Daniella's ability, Hannah is once again happy. Hannah then leaves to go to the shooting range, which leads Dani to tell a story about a fisherman.

Hannah later asks Andrew who he has his sights on, to which he replies Daniella. Later, Daniella has a therapy session with Noah, during which he describes his desire to die and come back stronger. Dani laments on the fact he begins talking about a dream but then talks about the real event of his resurrection. As Noah expresses his dislike at returning to life, Daniella begins to talk about dieing as a child, and the fact that everyone came to her when several agents died. Noah apologizes for upsetting her but Dani happily replies that she enjoys him visiting her. After Noah leaves, Dani briefly breaks down in tears and sadness before quickly returning to her usual happy self.

Dani soon talks with Andrew and asks him several times if he wishes to talk about his father or mother but Andrew refuses, wishing to talk about her. Dani refuses stating it wont help Andrew in the slightest. Andrew then leaves, prompting Dani to claim she needs lime flavored Jell-O. Dani later talks to Mila Herrera and receives some advice about the actual feeling of love. Dani states she does not understand it and that she does in fact know that Andrew and Noah love her. Mila attempts to explain love but Dani still does not understand.

Daniella manifested her ability at a young age. As a baby, she was able to sense to fear and sorrow in the room as her mother lay dying. She blocked Molly's clairvoyance, sensing her mother's desire to be kept hidden. She also pushed emotions into Molly afterwards. As an adult, Dani is able to sense a person's emotions, both on the surface and deep in their psyche, as well as "push" emotions into people. According to Molly, she has made warlords weep and filled serial killers with overwhelming guilt.

"She knows every thought and feeling of every person she has ever come into contact with. For her... well, imagine your best friend, someone with whom you have shared everything: your past, your nightmares, your dreams, your fantasies. If Daniella has been in your presence for more than a few seconds, that's who you are to her. And since she doesn't know how to turn it off, everyone’s that to her. And she’s lucky that she's the type of person who can handle it."

- Molly about Dani (The Lives We Live)