Claire Bennet, born Claire Gordon, is a version of Exposed Future Claire Bennet in The World Entire universe. She was a Special and a lead agent with The Pinehearst Company, but transferred her allegiance to The Company, where she acted as a medical officer and a reserve agent.

Claire does not appear in this series, but is mentioned multiple times. Elle compares her situation to Noah's, whereas her father is dead, Claire is alive. Gabriel considers the difference between Claire and Elle's blood as he is about to kill Elle. Later, Gabriel laments that Claire will not let him get within ten feet of her, disallowing him to cure her lack of pain. 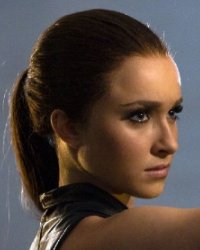 Claire is a cynical agent of the Pinehearst Company.

Claire is notably darker in this series. Part of the problem can be drawn from her analgesia--lack of pain--that Sylar caused her when he took her ability.

Claire spends most of The World Entire as a lead agent of the Pinehearst Company who selects her team. Claire’s first mission is to track down the past Peter Petrelli, who is responsible for the Costa Verde Disaster. Tracy relays the message from Gabriel and Elle that Peter most like returned to his own time.

Claire next mission is to track down Matt Parkman, who has stolen Peter’s body after reviving it. She visits Janice McHenry, Matt’s ex-wife, but is called away when Matt shows up at Pinehearst. Matt escapes but before she can retrieve him, her team is sent to deal with the Port Reyes Prison breakout. They fight along side Company agents, but are ultimately unsuccessful in quelling the uprising. They are saved by the Powered Legion. Claire and her team are put in charge of the cleanup, where she encounters an old friend.

Claire was a major fighter during the invasion of the Hartsdale facility of the Company. During the melee, Claire is telekinetically pinned by Gabriel. He slices opens her head and repairs the analgesia she’s been experiencing. Overwhelmed by her ability to feel pain, she repentantly flees with Peter Petrelli and decides to join his team. She is with him when the Epidemic occurs. She tries to help the fallen victims, but finds her abilities have been removed.

Peter retrieves her and reinjects her with the Formula, giving her back her ability. When Peter is assigned to Company duty, she asks to assist him in the medical facility, tired of hurting people and would like to heal them for once, since she is the last remaining regenerator.

Claire is at the birth of Peter's daughter. She helps Peter choose the named Hannah, after the archangel Haniel, the angel of glory and the month of December. She later meets up with Peter and they teleport to Coyote Sands. While Peter is off retrieving food, Hannah explodes again and Peter and Claire take her to Japan, where Claire assists in raising her.

Claire, because of her ability, was tapped for top-secret team tasked with taking down the Sixers. She lends her ability out frequently, donating organs and blood to find a way to stop them. She reports to Molly Walker for this assignment.

Claire has the ability to heal quickly to any injury, and one of the few living Natural possessors of it, and as such is one of the few sources of Natural regenerator blood in the world. She provides her blood to Pinehearst and the Presidency in vast quantities, and later the Company. She also provides organs for the Company to test. Claire must "make up" for the matter and energy required to heal by consuming large quantities of food.

- Claire (The Lives We Live)

"Look, if working for the Devil is going to save the world, I’ll do it. I save lives. If I go to Hell for it, I’m not worried about pain. In fact, I’d welcome it."

- Claire to The Haitian (The Tongue of Deceit)

"I shot you. With a gun. I made you dead... ish. I mean, who forgives someone for that?"
"Your Uncle Gabe and Aunt Ellie got over that hump."
"That comparison is creepy on multiple levels."

- Claire, Peter Petrelli (The Truth of the Moment)