Tobias "Jack" Swift was born on June 22, 1990 to Thomas and Rebecca Swift. As the youngest, Jack always feels as if he is being over-shadowed by his older siblings and becomes moody whenever somebody mentions how Fredrick and Carrie came into their abilities before him.

Pyrokinesis: Jack can create fire from his hands and with years of practice, he has made his flames turn blue, signifying the extreme temperature of the flames.

Rapid Cell Regeneration: Jack cannot be hurt or die. It is unknown if he can survive decapitation or brain removal.

Power Accessibility: This ability allows Jack to have access to every ability known to man. His eyes turn blank like the precognition ability. A disadvantage of this powerful ability is that the more Jack uses his Power Accessibility, the more of his goodness is ripped away.

"Didn't you start manifesting at 9 or something? I manifested at..."

"I know. It's fun irritating you."

"Shut up. Shouldn't you be at your house? In Odessa?"

"Yeah, but the Petrellis offered to throw me a party for the fun of it."

"By the Petrellis, do you mean Peter, Nathan, and Claire or the whole Petrelli family?"

"Peter, Nathan, and Claire. Angela still doesn't like me."

"Nah. Too young and stupid." 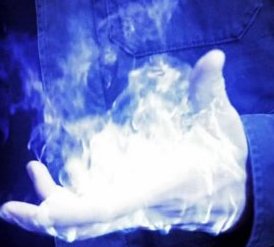