Punxas is the assumed identity of a young mathematician known simply as "Michael." Born and privately educated in northern California, Punxas' life was quite simple as a regular human being. However, his life was to change quite drastically. In late 1997, his ability manifested, and Punxas successfully was able to mimic an ability via one of his hated instructors. Shortly thereafter, he was kidnapped and experimented upon by agents of The Company, but deemed not a threat due to a misdiagnosis of his original ability. Oblivious to the experience, he progressed through life as a regular college student. That was until, one fateful day, Punxas met a man who he didn't recognize but somehow, he could remember. From then out out Michael experienced a brave new world of trouble. 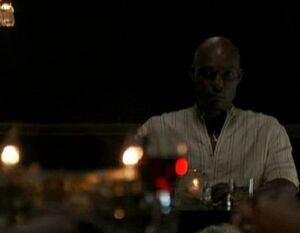 The Haitian unintentionally blocks Punxas' ability while on the job.

Punxas is mingling at a Los Angeles bar, attempting to impress some attractive women with his complex mathematical prowess. Amazingly, he blunders through a simple equation and a punchline, embarrassing himself. His attractive company leaves him while he frantically looks around the area, terrified. As one patron collapses and an oddly intriguing, yet familiar, face assists the man out of the bar with some help. Confused, Michael vows to figure out what occurred to inspire his feelings of deja vu, and follows the three men out of the bar only to discover that they had quickly disappeared.