A note of history

I'm all in favor of this article, and I'm glad you're working on it. In the past, an article about Paul E. Sylar has been written and deleted (more than once) because it was pure speculation based on a birth certificate barely shown in a promotional image from NBC. However, since the unaired pilot showed this Paul E. Sylar guy to be a living, breathing man (and not just a name on a piece of paper, or even a voice on a message), he's just as legitimate a candidate for an article as Amid Halebi or Captain Chase.

I'd still be very careful about speculation in this article, though. For instance, there's still no evidence that the picture of the altar boy that is hanging near the birth certificate is actually a picture of Paul E. Sylar, so I would remove it altogether. Also, Paul E. Sylar exists solely in the unaired pilot, so there should be no mingling of information with the Sylar we all know and love. In other words, if you want this page moved to the mainspace, it would have to be simply a history of the guy Mohinder meets at the end of the unaired pilot, and nothing else. However, if you want to keep all the speculation and stuff that's here (you know, to preserve your theories and such), that's fine, but then it really can't be moved to Paul E. Sylar. Just an friendly FYI. :) -- RyanGibsonStewart (talk) 22:31, 5 September 2007 (EDT)

A few more things are needed before this can move to the mainspace:

What is needed next then?

I agree with you guys that we should have a true Paul E. SYlar mainpage. I agree with you guys that we should remove speculation. I am going to move some stuff to the notes. However, some of the episodic stuff doesn't specifically identify GG or PES as who the 'Sylar' being addressed is, and I think they could stay, and not be speculative; since exact identification of 'which Sylar' wasn't given. For example, we know from the Unaired Pilot, that it was PES and not GG, on the Sylar Tape; which did debut in Dont Look Back. I'll move some things and change some things, and you guys tell me when you think it is close enough to mainpage it. --HiroDynoSlayer (talk) 09/6/2007 12:04 (EST) 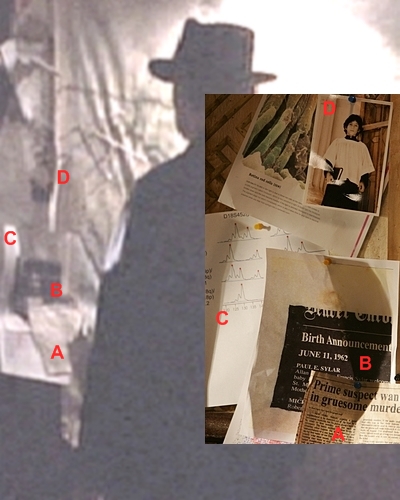 After enhancing and lightening the Unaired pilot clip of Paul E Sylar, and comparing that to the unreleased Altarboy promotional picture from the (One Giant Leap) scene with Eden and Mohinder, you can see the previously unrelease promo clips hanging on the wall on the left-side of the map, behind Paul E. Sylar. We need to find more clips of this scene, and perhaps someone with the hi-def release of the boxset. This at least, moves the promo-clips into the realm of the Unaired pilot. I think we may find more discoveries like this as we dig into the box-set scenes. --HiroDynoSlayer (talk) 09/6/2007 13:15 (EST)