From Heroes Wiki
< User:DocM
Jump to navigation Jump to search

Isaac stumbles around his loft, unsure of where his destiny will lead him, rambling about the death of Simone, when his phone rings. Desperate, he answers it, when he hears a voice at the other end. It is Matt. Matt explains to Isaac that, back in 2003, he bought a painting of Isaac punching a goat. Confused, but knowing what he must do, Isaac hangs up his phone, grabs his coat, and exits his loft.

In his home, D.L. and Jessica debate about their son, Micah. D.L. tells Jessica that Linderman must never be a part of their lives ever again, but Jessica tells him that the money is worth the trade. D.L. tells her to forget about the money, even resorting to the words "money schmoney", and storms out of the house in a fuming rage. Jessica hides in her closet out of fear.

Elle, still reeling after being unable to prove whether or not Claire has an ability, complains to her father and demands a reassignment to another part of the world. Bob, in a moment of pity, decides to tell Elle a story he has never told anybody before - the story of his birth. He gestures Elle to sit down.

To try and quench his rage, D.L. bursts into the Wandering Rocks, and sits down at the bar, ordering himself a pint of bovril on fire, when a man sits next to him. D.L. and the man stare at each other, when D.L. quickly realises who the man is - Tuko, his brother. They share a hug, and D.L. explains that Linderman is trying to get away with things he cannot. Tuko tells D.L. that he is stronger than that, when D.L. says "don't tell me what I already know." Tuko gives D.L. additional help, stating that he knows who Linderman is. 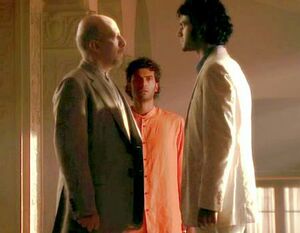 Mohinder and Chandra argue over his research.

Mohinder tries to figure out his father's research, unable to understand it, when he falls asleep and has a dream. Chandra tells Mohinder that his research is ultimately correct, although Mohinder refuses to believe him, demanding proof, or evidence, of anything his research purports to be correct. Chandra, nearly storming off, angrily states, "innocent until proven guilty."

Tuko walks outside of the Wandering Rocks, when Ricky joins him outside. Ricky asks Tuko if he will ever help his brother, when Tuko tells him that, in a few months time, an eclipse will occur, and he shall return at that precise moment in order to save the world. Ricky prepares to ask a follow-up question, but Tuko glares at him. Ricky runs back into the Wandering Rocks. Tuko walks back in, when D.L., stood around the corner, smiles to himself - he knew about the effects of the eclipse since October 1, 2006.

Mohinder, still dreaming, ends up in the future, where he sees Sylar and Elle kissing in an empty house. His vision zooms out, and he realises that he is, in fact, watching this on television in the year 2009. Waking up, Mohinder, absolutely confused, wonders what the dream meant, when he returns to figuring out his father's research.

Linderman looks around his archives, becoming more paranoid by the second, when he hears a faint laugh coming from outside the door. Jumping behind a painting, Linderman glances out from behind, hearing another echoing laugh, when two letters form in his mind: D.L. He looks around for answers, when his eyes fixate on a painting of D.L. destroying the world, and realises it was painted by D.L. himself. 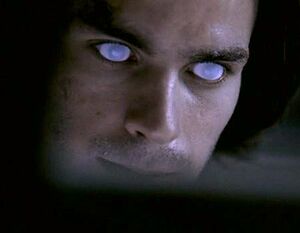 Isaac enters a trance before fulfilling the prophecy.

Arriving in the middle of a farm, Isaac searches up and down the fields, when he sees a goat a few feet away from him. He, at first, stands in front of the goat, watching it, getting to know it, when he suddenly sucker punches it, thus realising the prophecy.

Still annoyed over his own confusion, Mohinder storms out of his apartment, clambers into his taxi, and drives to a remote farm in the plains. Resting momentarily, Isaac gets into his car, and asks for a lift back to his loft. Agitated that Isaac did not say "please", Mohinder says "gladly", and rips out Isaac's teeth, forcefeeding them to him, fulfilling a prophecy shown in 9th Wonders!.

Linderman, worried for the sake of his soul, stumbles around his office, when, in a moment of anxiety and fear, scratches his beard.

At that exact moment, Isaac has a sudden heart attack, and flatlines. On the news in the background, the entire city of Brussels is brought to rubble, as a news reporter delivers the horrific news.

In 1945, a woman, in agony, gives birth to a child, which the doctors crowd around. Helping the child and cleaning it, they announce that it is a boy, and the mother decides to call the child "Bob" after the child's father, much to the father's pleasure. After much crying, the baby Bob manages to say his first word - "catalyst". The mother and father grin wildly at this, thinking that the word means nothing. 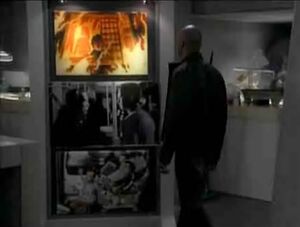 D.L. phases straight into Linderman's archives, and bellows out the mobster's name, demanding his attention. Frightened, Linderman hesitently surrenders himself to D.L.'s will. Almost resigned to his fate, he simply mutters to D.L., "it was God's plan." Feeling that Linderman has served his use, D.L. fires lasers out of his fingertips, and detonates the entire archive. Linderman, in a moment of survival, jumps out of a window and plummets several feet.

Elle, almost in tears after Bob's heartbreaking story, rushes out of the office in order to cry to herself without interruption. Bob cleans his glasses, and wishes to himself that he had a Company jet. 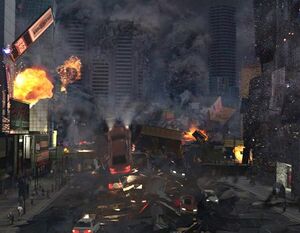 D.L. comes to the inescapable conclusion that his arch-nemesis, Linderman, has eluded him once again. Clenching his fist, he punches the wall with enough force to create a rift in the space-time continuum. The rift closes up seconds after being made, and the entire Earth shakes violently, as D.L. laughs like a maniac. It is the end of the Earth.

In space, a gigantic sonic boom wipes out the entire universe.

"Isaac, I have to tell you about your future. It's of you... punching a goat."

"Punching a goat? If that is my destiny, then so be it."

"Who the hell was that slamming hot blonde woman? God, I would do her rough."