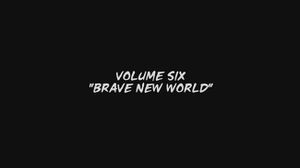 The sixth volume of Heroes was to be entitled "Brave New World".

The fifth season of Heroes was intended to be a continuation of the series, beginning with Volume Six: Brave New World. Volume Six begins with Claire revealing her ability to the world. On May 14, 2010, when the press announced that Heroes was canceled by NBC, there were still talks between NBC and Tim Kring about wrapping up the series in the form of a mini series or a television movie; however, in September 2010, NBC officially announced that a wrap up movie was not going to happen.

Later, in February 2014, it was announced that Heroes Reborn would air as a continuation of the Heroes world, beginning with the aftermath of Claire's public announcement of the existence of evolved humans.