The April 30th Behind the Eclipse seems to imply that the Helix paintings aren't around anymore due to Isaac meeting Hiro: ... because of Hiro's involvement there are small details that have been changed throughout the series. (Similar to what we droned on about earlier with both Hiros) Isaac's loft is different than when Hiro went there the first time (Remember all the Helix paintings?). Hiro's life changed when he jumped back to the Subway, then Isaac's life changed when he met Hiro in Odessa. --ZyberGoat 13:14, 1 May 2007 (EDT)

We should probably remove the history from this page so it matches the much cleaner-looking Isaac's paintings. — RyanGibsonStewart (talk) 15:55, 25 May 2007 (EDT)

How do we know that Image:painting symbol earth.jpg was painted by Isaac? It was never shown in his apartment before he died, and Hiro got there about a week after he was killed. It's not obvious it's Sylar's painting, but it's certainly not obvious it's Isaac's, either. And why did the other paintings stay? I'm not understanding. -- RyanGibsonStewart (talk) 23:09, 14 June 2007 (EDT) 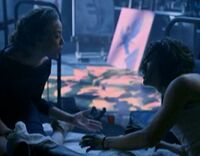