From Heroes Wiki
< User:BoomerDay
Jump to navigation Jump to search 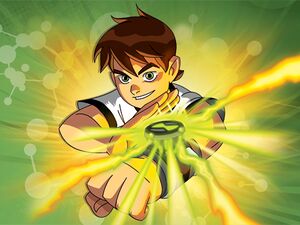 Ben Tennyson is a teenager who, due to a piece of alien tecnology, can shapeshift into any of a million different species of alien.

Benjamin "Ben" Tennyson, AKA Ben 10 (voiced by Tara Strong in Ben 10, portrayed by Graham Phillips in the first live action film Ben 10: Race Against Time, voiced by Yuri Lowenthal in Ben 10: Alien Force and in Ben 10: Evolutions, portrayed by Ryan Kelley in Ben 10: Alien Swarm) is the main protagonist of the series. He is a typical ten-year-old boy—he plays video games, rides his bike, and often gets into mischief.However, his life changes when the Omnitrix latches onto his wrist. Unable to remove it, he uses its powers to become a hero. However, he finds the job trickier than he imagined, especially with the evil alien warlord Vilgax pursuing him relentlessly to retrieve the Omnitrix.

Ben is something of a glory hog, sometimes taking credit that he does not deserve. He also tends to be a sore loser, especially when it is Gwen - with whom he shares a love-hate relationship - who outdoes him. Ben is not above using the Omnitrix to pull pranks, even during urgent situations. In spite of all this, Ben is good-hearted and will stop at nothing to protect his family or anyone in danger. Even when not in alien form, Ben's resourcefulness has saved himself and others from many a dire situation, especially when the Omnitrix cannot activate or does not provide him with the form he originally wants.

Ben's relationship with Gwen in the original series is complex. The two of them bicker almost constantly, can hardly agree with each other on anything (the only exception being their dislike of Max's bizarre cooking), and their fights have, on occasion, even led to physical confrontations. Despite all of this, they truly care about each other, showing genuine concern when the other is in serious danger. A prominent example is in Ben 10: Secret of the Omnitrix, when Ben is deeply saddened when it is thought that Gwen had died, and hugged her while in tears when it is revealed that she had survived.

In the sequel, Ben 10: Alien Force, Ben (now voiced by Yuri Lowenthal) is a much more mature, resourceful and responsible character, having learned the value of teamwork through his role as a goalkeeper for his soccer team, and at the same time growing out of his childish antics. He now sports a black shirt, a green jacket with a white vertical line with the number 10 on it, while his soccer uniform resembles his original clothing. He found a way to remove the Omnitrix roughly five years before the series began, allowing him to live a normal life. When Grandpa Max goes missing, he teams up with Gwen and a reformed Kevin to find him. Ben is now far more adept at using the Omnitrix, actually thinking about which alien would be most effective against an opponent or the most appropriate for a situation, rather than simply selecting the one with the most physical power as he originally did. The fact that the new Omnitrix does not malfunction as it once did helps. His relationship with Gwen is also better; they no longer fight, and their quips about one another are more friendly. He also has a girlfriend named Julie Yamamoto.

When Ben puts the Omnitrix back on, it recalibrates, giving him access to a new set of alien forms; in addition, it reconfigures into a more watch-like shape with a new symbol (resembling that of a Plumber's badge) and gains additional abilities, such as repairing genetic damage. It also carries a new weakness: if Ben's aliens are hurt, Ben himself retains the injuries when he reverts to human form, though this has not proven to be any real problem so far. Contrary to the Omnitrix's previous ill-timed deactivations, the new Omnitrix seems to remain active as long as it needs to. Ben changes back to human form at will, and can transform to another alien within an instant. However, its power will eventually deplete and requires time to recharge.

It seems that, in Alien Force, Ben has become quite famous for his reputation in the alien underground, the fish-like alien Plumber Magister Labrid referring to him as "the legendary Ben Tennyson", and Mike Morningstar mentioning that he is a big fan of Ben's, and is surprised to see him after his five-year disappearance.

Ben gained a watch that gave him the ability to transform into over ten million different species of alien lifeforms.