A pitch for a possible new season for heroes

Me and a handful of unwanted teenage orphans have just been adopted by this man and his girlfriend or wife. They told us we're not all going to live with them, we're going to live in a facility to make us more social like. When we got there they treated us like kings and queens I mean we living large, but I knew there has got to be a catch and my feelings were shared by this girl, Stephanie and her what appears to boyfriend Davon. After everybody but us was gone we knew we were next for whatever and we became scared. When they sent somebody to retrieve us our fear became anger for not running away when we had the chance. When we reached a metal door I heard a gun blasting in the backround and I knew I was going to die. The man opened the door and nothing but dead bodies of orphans lay on top of surgery tables. The man who took us to this room pulled a gun out and shot Stephanie and Davon first in the head and then proceeded to do so with me. I was dead and was literaly watching my own body being injected with something and then I felt snatched back into my body. I was reborn! I overheard one of the scientists tell Angela Petrelli the lazarus formula works.

I think when Peter gets his powers back he would begin to have a Jesse Murphy voice in his head telling him to do evil things, due to the fact that when Peter was placed in jesse's body and then released a piece of Jesse came out with him and is very angry like Jessica to Nikki Jesse begins to slowly control Peter's actions starting with his original ability Sound manipulation.

Micah: It's 2011 an i go to a school full of special people like me, and my deceased parents. In 2007 a scientist who works at a big time company called Pinehearst developed a formula that gives ordinary people powers for a fee, or up for grabbs if your desperate.

Micah: Me unlike some few students at my school was born extroadinary gifts. I'm now 16 years old now and instead of getting a car like normal kids my power completely evolved to an enhanced intelegence which turns my Technopathy was an early by product ability that came from that intellegence by diciphering electronic codes through touch and remotely by creating a frequency that comes from my skull to make gadgets and other electronic materials do my bidding. It appears my brain is so powerful that i learned how to trigger new abilities in my dna such as Muscle mimicry, and Agility. Using these gifts i when from Virgil Hawkins to a celeb around my school by playing football.

Micah: Until recently the school was a nice safe place with few power tripping bullies such as Tyler and Adam who both possess the power to shapeshift in to any animal they please but that all changed when my Childhood friend who also became more powerfull and more changed then others Molly Walker returned to school as an agent for a terrorist organization after being missings for 3 months.

On level 5 there are tons of monsters and Psycopaths who are like Sylar or even worse. While i was locked away there you could never sleep over the tons of voices yelling and ranting on "I'm Sylar, My name is Sylar, I'll kill you if you don't let me go Now!" Me i took comfort in my cell with the idea of Them meeting the real Sylar face to face, but of course that would never happend because I'm pretty sure they would destroy him with there abilities such as Optic blast, becoming Werewolves, stealing oxygen from someones windpipes, and creating a vortex. I'm mean who could survive all that, Until i had heard a new voice "I'm Peter Petrelli!" I knew something knew was going to happend that day. And something did Sylar was there and he took down Elle and Bennet and he even released us, but now i wonder what has he done with these monsters now in this world and are very very angry. 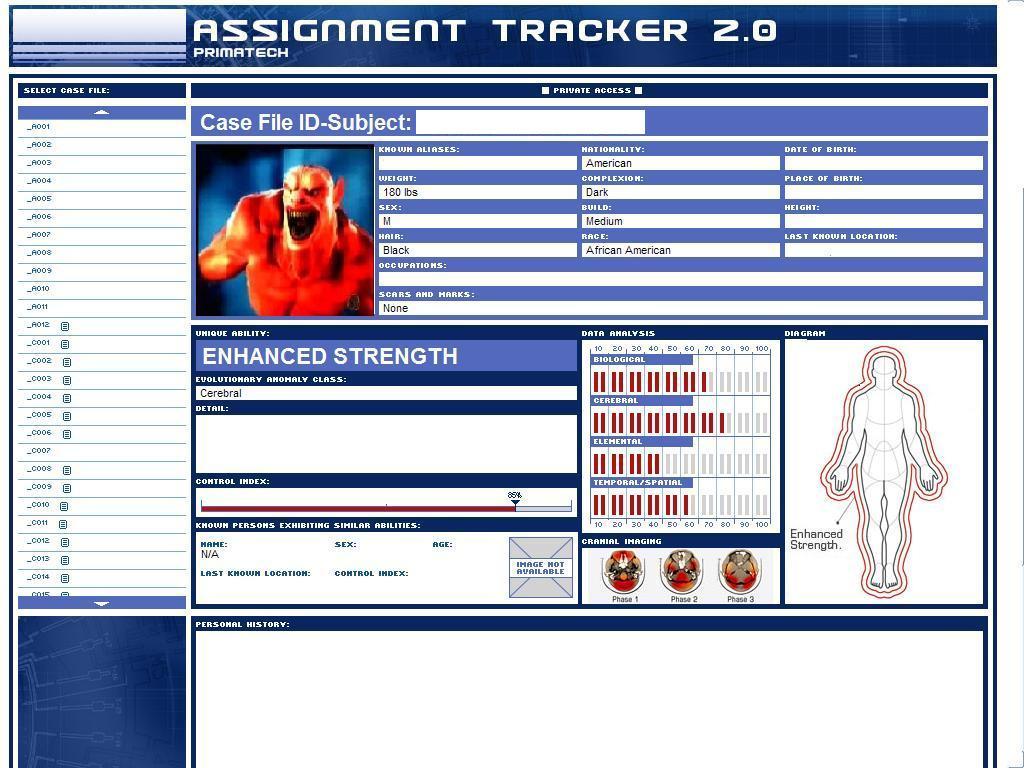 Davon ability to generate incredibly powerful vibration waves from his hands. He can use these waves to cause matter to shatter or crumble. When these waves are directed at a building or directly into the ground, they can create effects remeniscent of earthquakes or avalanches.