Chris Coolidge was a musician who preformed in Greenwich Village in 1963. Chris was shot dead during a riot that he started after one of his concerts was interrupted. He was an evolved human with the power of enhanced synesthesia.

On July 12, 1963 in West Greenwich Village, Chris is performing at a place called Uncle Ira's. While Bob Bishop considers his lyrics slightly ridiculous, Charles Deveaux seems to be enjoying the music. Chris finishes his song and tells the crowd that the next song was written for his little sister, who just entered nursing school. The future Company remarks that, while he doesn't seem like much of a musician, he's still "great at it". Later, several police officers interrupt the show, claiming that the room is over capacity. Chris says that this is the third time they've done this to him, and the woman next to him claims that they don't like the message he's sending. A fight ensues, and Chris sends a blast of sound out, saying that they will start a riot.

Chris runs from the Uncle Ira's and encourages his mob to fight on. Under his influence, the mob causes massive damage. As Chris encourages his people, Angela Shaw, Daniel Linderman and Charles Deveaux tell him to make it stop. Chris notices that they are right and that many people are dying. He moves to stop the fight but Kaito Nakamura tries to stop him. Chris says that he cannot speak Japanese and tells Kaito not to worry, as people tend to "listen to him". Chris tries to play his harmonica to stop the fight, but he is shot dead before Kaito can reach him.

Mindy Sprague remembers Chris as one of her favorite musicians.

When Claude and Thompson enter a safe house, a radio posthumously plays "a little underground classic from Chris Coolidge." The radio broadcaster remembers Chris and says that he is still missed.

When Elle uses her ability on a record player, she damages the record. Her father shouts at her, holding up the case for Chris' album, Door-to-Door Revolutionary, telling her how rare it is.

In Hiro's fourth blog post, "Blast from the Past", Hiro listens to Chris' album and continues to contemplate going back in time to Uncle Ira's Counter & Culture.

In Hiro's fifth blog post, "Day of Despair in 1963", Hiro finds a newspaper article about the riots that happened the night the Chris Coolidge was killed. He feels like his father played some role in this, but does not know why. 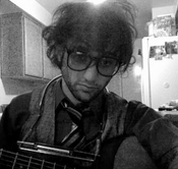 Born and raised in Missoula, Montana, Coolidge exhibited a preternatural musical talent by age 3. Both parents were employed as music teachers, thus the home/school environment enabled "innate" talent to flourish. No evidence that either parent possessed an evolved ability, nor is there any indication of specific date of ability manifestation.

Coolidge immigrated to New York City in the first week of January, 1963. Two impromptu performances of original, politically charged folk music in Central Park drew crowds numbering in the thousands, and sparked a meteoric, albeit brief career. Although Coolidge was largely unknown outside of New York City, he quickly became a galvanizing local fixture, inciting frequent public actions and events. Listed as Person of Interest by NYPD on February 14, 1963. See File Addendum P013-PD for NYPD rap sheet and surveillance file.

By early May of 1963, Coolidge was performing most nights in the coffee houses and performance venues of Greenwich Village to capacity crowds. Fanbase was considered to be particularly zealous; despite fierce debate as to the actual quality of Coolidge's music, fans claimed that his music affected and inspired like no other.

On July 12, 1963, Coolidge took the stage of Uncle Ira's Counter & Culture for a sold-out show. Also in attendance were A. Petrelli, C. Deveaux, R. Bishop, D. Linderman and then unknown K. Nakamura, in New York to "escape his destiny." [See Event File No. 11] At approximately 21:04, 15 NYPD officers enter the club to begin crowd dispersion, citing overcapacity. Utilizing his ability, Coolidge elevates the altercation to full riot status, in what newspapers will dub "The St. Mark's Coffeehouse Riots." Four casualties, 23 seriously injured, $1.2 million in property damage. After realizing the gravity of the event, Coolidge attempts to abort the riot at approximately 22:31, utilizing a harmonica to calm the crowd. Despite Nakamura's attempt to intervene, Coolidge is felled by an NYPD bullet to the skull.

The case file also contains a psychological profile on Chris:

It's clear that as Coolidge's popularity as a performer grew, his ability amplified increasingly. The zeitgeist of the era's disenfranchised youth provided ideal fertile ground for the empathic transmission of Coolidge's largely anarchic political agenda [root cause and ultimate purpose as yet undetermined].

Chris had the ability of enhanced synesthesia (referred to as empathic manipulation in his assignment tracker), which enabled him see sound waves as light and meld his emotions with music, effectively drawing large amounts of people to him. Chris apparently used his ability to draw crowds of thousands to his concerts. While being able to see sound, Chris could also produce destructive blasts of sound, as he did with a strike of his guitar. (From the Files of Primatech, Part 1).

According to his Assignment Tracker file, Chris's biological level was 70, his cerebral was 80, his elemental was 15, his temporal/spatial was 50, and his control index was 73%. 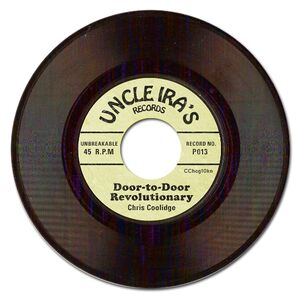 Christopher has his own record called Door-to-Door Revolutionary.

Chris sings two songs in From the Files of Primatech, Part 1. The first song ends with

His second song, dedicated to his sister, begins with

When Elle enters Bob's office in From the Files of Primatech, Part 7, he is listening to the song Chris had dedicated to his sister.