Evsdropr has sent several messages throughout the graphic novels, often through text messaging.

Evsdropr called Donna Dunlap on her phone when she is dating with Blake. Evsdropr's voice is digitally altered according to Donna.

Listen carefully. This is not a joke. This is a set-up. The man across from you is a killer... Look under the table. I've taped a gun under your table. Take it.

Evsdropr called Donna Dunlap on her phone after Donna's memory has been erased.

...And that's what they did to you. Wiped your mind. The next day, they convinced you. With a clean slate. That's how these people operate. I arranged to place you next to Bennet. I didn't think they would react so strongly. [Donna: They erased my memories? Its inhuman.] That's why we need to take them down. That's why I need your help. So, are you in? 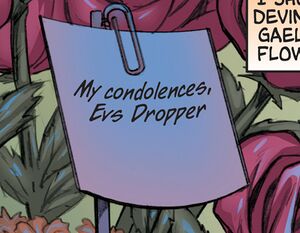 It is known that evsdropr gives out a false message that Cushing is killing the Company's employee.
After Thompson, Jr. killed Cushing, evsdropr sent him a flower with the message: 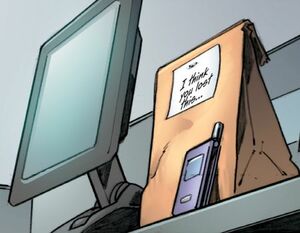 [Donna: What.] I know what you're thinking. [Donna: I doubt that.] You want out. [Donna: You have to get me out of this. If they catch onto me...] There is no quitting. They will kill you, or lock you up. Only one way to get out. Bring down the Company.

I think you lost this...

The package contained a bullet and a new mobile phone to contact Donna.

Evsdropr called the teleporter shortly before he was bagged by the Company:

[Teleporter: Who is this?] You know who it is. Evs dropper. I've kept you safe so far. Now listen carefully, whatever you do, don't open the door. 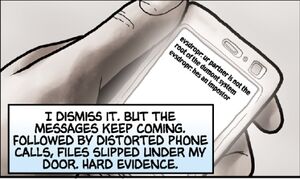 It is also revealed that evsdropr has contacted Sabine Hazel for many times. 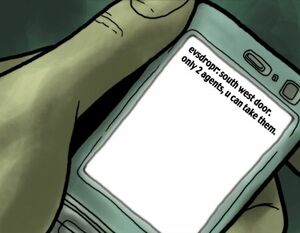 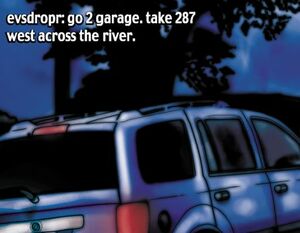 south west door. only 2 agents, u can take them.

take 287 west across the river. 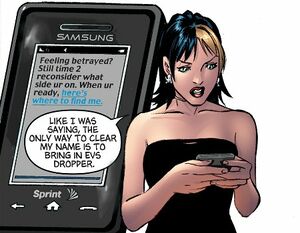 After a confrontation between humans and evolved humans, Evsdropr texts Donna.

Feeling betrayed? Still time to reconsider what side ur on. When ur ready, here's where to find me.