I put the location template on this page. I am thinking of making a "place" location similar to the "location" one, for places such as Niki's house, Claire's high school, and this diner. ----

It really bugs me that the logo on the window says "Cafe" while the episode text in Seven Minutes to Midnight said "Diner". Oh well. Not much to do about it except add a redirect.--Hardvice (talk) 17:24, 29 November 2006 (EST) I noticed that too, but I'd go with what the episode text says. Can't win them all. ----

Burnt Toast in The Fix

Since we don't know for sure Claire and Zach were at the Burnt Toast Diner, should we just remove that whole section as speculation? Heroe 23:23, 2 February 2007 (EST)

I'm not sure it isn't. The floors are the same, and they're pretty unusual floors. That, along with the same horseshoes on the walls and light fixtures leads me to believe that it's the same diner. Midland and Odessa are less than a half hour from each other (Sheriff Davidson, for instance, works in Odessa and is a regular at the BTD). I'm pretty sure they're the same restaurant. In either case, the note on the page needs to be changed. — RyanGibsonStewart (talk) 23:43, 2 February 2007 (EST)

Also, you can see the logo in the window. It's the BTD. 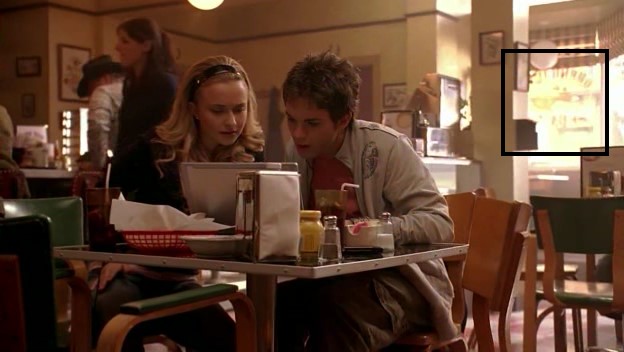 Is it not the same one as the coyote sands cafe and the indian one where hiro and ando go to stop the wedding? just thought its a mention, watch out ofr the burnt toast diner set around. --345tom 16:43, 27 April 2009 (EDT)