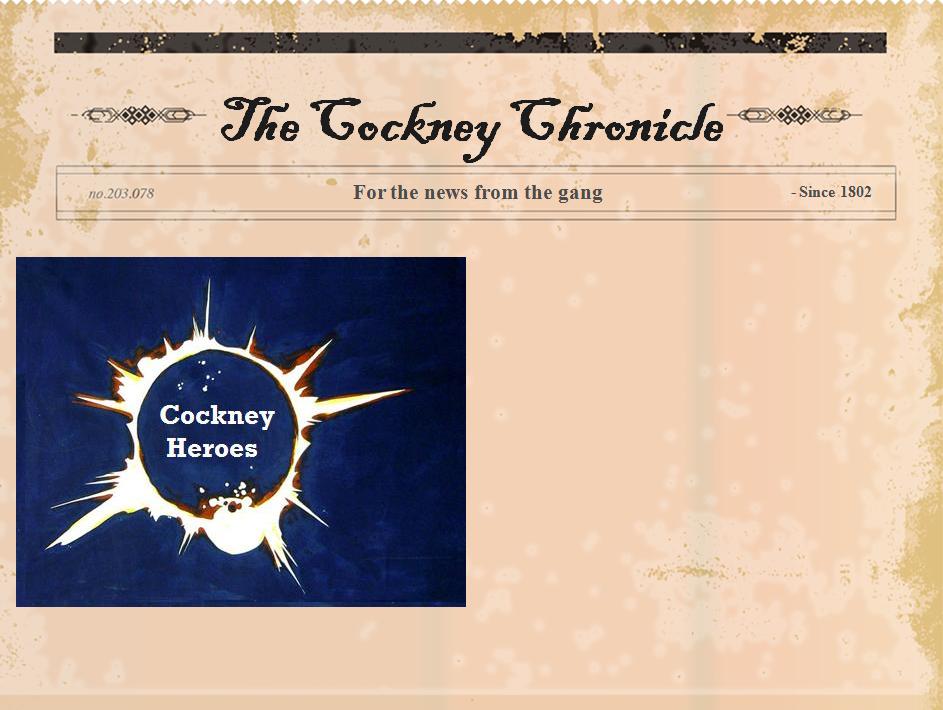 15th June 2010 - Hi everyone, Altes speaking. I am happy to announce that a new Origins arc is coming soon, written by me, hope you'll enjoy it!

11th November 2009 - Hi guys Danko here, just posting link for the cool new Cockney Heroes video made by Irony, check it out. Get ready for Volume 3, its gonna be great - Danko

10th October 2009 - Hi guys, Irony again. Just thought I'd add another blog entry because of an amazing contribution to Cockney Heroes from I Heart Heroes - who has created an appearance page for Cockney Heroes here. I personally think its fab :) As well as this, I have a sneak preview into the future of cockney heroes, don't worry no spoilers - but we will soon be announcing an official youtube account! Keep posted - Irony

9th October 2009 - Hey everyone Leckie here! I thought it was about time for the second Cockney Heroes blog (as we haven't done it in a while). So...... we have added Agent Jordan and Joshuakorolenko into the CH team! We are also VERY proud to announce the merging of Cockney Heroes and Chronicles! Also as you have probably seen, the Cockney Heroes Competition has ended and the winner has been chosen! We decided that "William Straye", who was actually created by Joshuakorolenko, is to become a main character in CH (and I guess Chronicles now). We decided on him because the power is brilliant and the character has been brilliantly detailed (Less work for us! :)) We have started releasing the new Origins arc, which will be describing the "Origins" of the character Karl Hall. We hope you enjoyed the awesome 2 part finale of Cockney Heroes, Volume 2, Radicell really is a brilliant writer! Remember guys, we have set up an official Cockney Heroes email address (cockney_heroes@hotmail.co.uk) so if you have any questions about CH then don't hesitate to send an e-mail, or you can just post on our talk page. Thanks for reading! - Leckie

20th September 2009 - Hi guys, Irony here! This is the first official Cockney Heroes blog (which will probably be run by Irony), I know it's exciting. Before I start I would just like to give a HUGE thumbs up and thank you to both RGS and a fellow Cockney Heroes-er Radicell. The purpose of this blog will just to give a bit of an insight into the back-stage work on Cockney Heroes, but we will also be answering questions posted by readers here. If you want to ask any questions, we have set up an official Cockney Heroes e-mail which is cockney_heroes@hotmail.co.uk or just put the questions on the talkpage. So, after an extremely long break we've just released the final episode in the Pam Marshall origins arc (written by Leckie) and the amazing two part, volume two finale writtien by Radicell. What did you guys think? I'm glad we had an appearance from Dave, always a staff favourite (keep an eye on him, you may see more of him than you thought). Speaking of origins characters, we have a great origins arc coming up about a current main character - with a really explosive ending, very good. Anyway, with talks of Cockney Heroes Volume 3 coming around, we were wondering what the readers would want to see, if you think you have a cool storyline for us, e-mail us or post it on the talkpage, and it may just be included, thanks! Irony