The Evolved Human Profile for Betty.

Betty was a teenager who hated high school because she was always picked on because of the way she looked. Her best friend was a boy named Ren; the two of them imagined their enemies in their positions and feeling worse than they are. Betty then discovered that she could make people see anything she wanted them to see. She used her ability to get revenge on those who made fun of her. After one of her illusions got Ren killed she decided to take on a new life as Candice Wilmer. 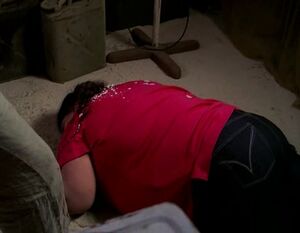 Betty's true form is finally shown when she is killed.

Candice became an agent for the Company and used her ability to deceive many people. She played a key role in helping Daniel Linderman have Nathan Petrelli win the election. She pretended to be Niki Sanders and had Micah use his ability to make Nathan win. Eventually Niki found Candice, posing as Jessica, and the two fought. Niki then learned that Candice wasn’t Jessica and used her ability to knock out Candice. Candice eventually awoke and then dragged a near dead Sylar off of Kirby Plaza. Four months after pulling Sylar off of Kirby Plaza, she took on another identity, Michelle, since the police were looking for Candice. Michelle had been taking care of Sylar ever since she saved him. She tried to convince Sylar that she would help him regain his abilities. However, Sylar felt her ability would be a good one to start over with and he then killed her.