Ali Larter is the American film and television actress who played Niki Sanders and her alter-egos Jessica and Gina in Volume One and Volume Two. Ali portrayed Tracy Strauss in Volume Three, Volume Four, and Volume Five. She also played Candice Willmer in several illusions.

Ali Larter has appeared in several television series, including Just Shoot Me! and Dawson's Creek. She has also starred in several films, including Final Destination, Jay and Silent Bob Strike Back, A Lot Like Love, and Obsessed. Ali has starred in Resident Evil Extinction in the role of "Claire Redfield". She also served as an associate producer of Three Way.

Ali appeared in Confess alongside Heroes castmate Eugene Byrd, and in Dawson's Creek, the visual effects for which were supervised by Mark Kolpack. 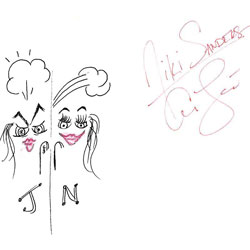 Ali Larter drew this picture of her character(s) in order to raise money for the Pediatric Epilepsy Project.
Retrieved from "https://heroeswiki.ddns.net/index.php?title=Ali_Larter&oldid=12756"
Categories: