Tawny Cypress is the American film and television actress who plays Simone Deveaux. She also portrayed Candice Willmer in an illusion in the episode Parasite.

Having only started her career in television acting in the 21st century, Tawny has already appeared in the series Law & Order: Criminal Intent, NYPD Blue, Third Watch, and Johnny Zero. She can also be seen in the film World Trade Center. Following Heroes, Tawny starred in K-Ville, Army Wives, and Rescue Me. She also had roles in Law & Order: Special Victims Unit, Warehouse 13, Blue Bloods, and The Good Wife. She had recurring roles in Unforgettable, House of Cards, Supergirl, and Blacklist.

Tawny has appeared with Brian Tarantina in Johnny Zero, with Sakina Jaffrey in Third Watch, and with Dan Warner and Frank Maharajh in Supergirl. 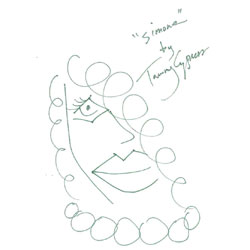 Tawny Cypress drew this picture of her character in order to raise money for the Pediatric Epilepsy Project.
Retrieved from "https://heroeswiki.ddns.net/index.php?title=Tawny_Cypress&oldid=168973"
Categories: