From Heroes Wiki
< User:Janrodrigo
Jump to navigation Jump to search 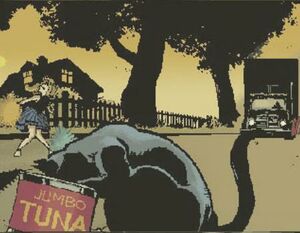 Claire & the Cat was a promotional Flash animation for Heroes produced by artist Tim Sale.

The Claire images were created for a function called the Upfronts, a gathering in the early summer of press and networks, to showcase and promote new shows. I drew maybe 30 images for a flash animation display that was used to show what Heroes would be like. It was extemely [sic] crude and clunky but seemed to do the trick. They put it online for a while, and then some of the art was turned into a story and part of the 9th Wonders comic given away at Comic-Con.

Th(e) Hiro panels are from an original story in that comic, and will be a part of some early episodes of the show; there is a lot of back-and-forth with Hiro and the comic and Isaac early on as Hiro discovers that Isaac has drawn a story about him that seems to predict his future.

And that's all you get out of me.