Arnold was a member of the Sullivan Bros. Carnival and a close friend to Joseph Sullivan. After traveling back in time to the year of 1961, Arnold was trapped in the past and forced to live out his life with no memory of himself or the carnival. After more than thirty years, Arnold was reunited with Joseph, Lydia, and Samuel, and was returned to the carnival. Dying from a brain tumor, Arnold was killed by Samuel. He was an evolved human with the ability to manipulate the space-time continuum. 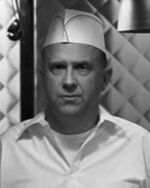 Arnold once worked as a cook at Lila Mae's.

As Ernie Crum, Arnold works in Lila Mae's café. He warns Angela Shaw and Charles Deveaux that interracial dancing is prohibited, and Charles uses his ability to make everyone think nothing happened.

Arnold attends Joseph Sullivan's funeral, and is helped back to the carnival by Edgar. Samuel later comes to him, and Arnold asks him if they are really going to stop running. Samuel says yes, and then asks him to send him back fourteen years into the past, just one more time.

Edgar asks Samuel if "the Chinese guy" is going to be replacing Arnold. Samuel insists that family members can't be replaced.

Arnold has breakfast alongside other carnival members.

Samuel has the old man send him back three years to Midland, TX and the Burnt Toast Diner. Later, after Hiro saves Charlie and affirms their relationship, Samuel has Arnold teleport Charlie somewhere in time. Arnold dies, apparently from the strain, and Samuel informs Hiro that he is now the only person who knows where Charlie is.

Amanda comes across a memorial to Arnold set up on the grounds of the carnival. She comments that he must have been popular and overhears several carnies commenting about Arnold's death and Samuel's possible input.

Arnold takes Charlene Andrews from the past. 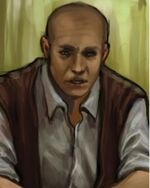 A much younger Arnold

Last winter, a much younger Arnold talks with Joseph about his headaches, and about Samuel. Joseph tasks him with going back in time to 1961, to Coyote Sands, and see if he can find a way to keep Samuel under control. When he has not returned in several days, Joseph and Samuel use Lydia to find him. Lydia says that he is alive, and in the present day, but the tattoo shows the elderly Arnold. In the 60s, Arnold realizes that he's arrived early, and is immediately knocked out by a U.S. Army member.

Arnold is awakened by Adam Monroe and is asked who he is. Arnold is unable to remember anything about himself and soon takes on the name "Ernie Crum". Arnold becomes the chef at Lila Mae's and is visited by Adam. Arnold comments on his fear about the storm that occurred the previous night. The two say their goodbyes.

In present time, Joseph, Lydia and Samuel discover the now elderly Arnold in his home. Arnold remembers everything about the carnival, who they are and what they can do. Arnold requests that they find his son, who is missing and agrees to return home. Arnold and Joseph talk and Joseph asks if he remembers why he traveled back in time. Arnold doesn't remember but Joseph tells him not to worry. Later, after trapping Charlene Andrews somewhere in time, Arnold lies on his bed, feeling the ill effects of accessing his power. Samuel enters and asks him if he did it. Arnold reveals that no one deserves the fate that Charlie received and goes on to reveal that Joseph was right about Samuel. Arnold admits that the reason he returned to 1961 was to kill Samuel. Arnold is then strangled to death by Samuel, who tells his "friend" to rest.

Charlie reveals that Arnold was waiting for her outside of the Burnt Toast Diner and teleported her to a street corner in Milwaukee on January 26, 1944, then teleported away, leaving her stranded there.

Arnold possessed the ability to travel forward and backwards through time. He was able to transport at least one other individual with him at any given time (Smoke & Mirrors) as well as transport just himself. Last year, Arnold began to have headaches after accessing his ability and as his life progressed he developed a brain tumor that caused him pain every time he would use his power.

Please refer to Theory:Arnold for fan-created theories and other speculation.