Evan Davis is a juggler at the Sullivan Bros. Carnival and an evolved human who can sense when things are about to go wrong. He works with his brother Josh.

Evan eats breakfast with other carnies.

In the moring, while Sylar and Lydia move rocks, Evan digs a hole. Later on, he serves customers cotton candy. At night, Evan crowds around to watch Sylar's baptism.

When Hiro arrives at the carnival by teleportation, a crowd gathers around him. Hiro shouts at the crowd (which Evan is a part of) and demands to be told where Charlie is.

As Samuel makes another speech at Joseph's grave, Evan listens with a bunch of other carnies. As Samuel speaks, Evan caresses his braided beard, deep in thought.

After Samuel uses terrakinesis to subdue a blood-hungry Sylar, Evan steps out of his trailer, carrying his juggling equipment, and looks at Sylar's collapsed body in shock.

Lydia and Amanda discuss Samuel and whether or not he is up to something. As they watch Samuel, Evan comes up to him and gives him a hug.

When Samuel creates an earthquake, Evan helps Lydia and Amanda out of the carnival. Evan runs onto a nearby hillside and watches as a neighboring town is swallowed up by the ground.

Evan listens as Samuel prepares to turn himself in before the carnival is attacked. He is among those who watch Lydia die and cheers when Chris and Doyle prepare to exact revenge on Claire. Evan is present when Samuel announces they will show the world who they really are.

As Samuel exits his trailer in a sling and makes his way over to Eli, Evan stops Samuel to see if he's alright. Evan gives Samuel him a concerned look, a gentle pat, and words of encouragement.

Evan listens to Samuel talk on the stage in Central Park. He nods in agreement. However, at night, right before the "show" is about to begin, Claire storms in and explains Samuel's true motive. At first, Evan is unconvinced, but then, Noah, Edgar, and Eli show up, backing Claire up. At this point, all the carnies leave and run, and are teleported to safety by Hiro Nakamura.

In chapter 3 of Slow Burn, Chris Bowman sees Evan and Josh practicing their routine as he goes to find Bo LoFontaine.

In chapter 6 of Slow Burn, The Watcher assigns Chris Bowman to watch Evan and his brother Josh and find out their secrets. As their shift ends, the two brothers head out into the parking lot, and Josh turns back into his normal self. Chris approaches them, and asks if he can tag along. They agree, and steal a car. The three drive to a local bar, and they reveal to Chris that they are not really twins, only brothers, but that it is useful to pass themselves off as such. As Josh orders drinks, Evan goes out back and calls his father. When he discovers Chris overheard, he threatens him, but Chris promises not to tell Samuel. When he comes back in, he finds that Josh and his friend Draph have gotten into a fight with another patron. Evan steps in, avoiding all the punches the guy throws. Chris launches a fire ball, scaring the guy off, and Draph wipes the memories of everyone at the bar so they don't remember the fight.

Back at the carnival, Chris reports to The Watcher that Evan called his dad. 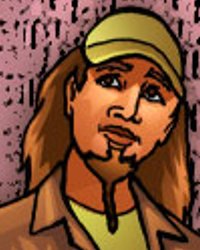 Evan, as he appears in the iStory

In chapter 8 of Slow Burn, The Watcher watches Evan and his brother throw a ball back and forth. Evan manages to catch it every time, thanks to his ability.

In chapter 9 of Slow Burn, Chris and Bo approach Evan and Chris asks how Josh and "everyone" is. Evan realizes that Chris is referring to his family outside of the carnival and says that everyone is good. He then asks what he can do for them and Chris asks if he has seen The Watcher. Evan tells them that he noticed someone strange watching him and Josh but they never spoke. Chris and Bo thank Evan and leave.

In chapter 10 of Slow Burn, Evan is at his game booth, but he is really on the lookout for The Watcher.

In chapter 3 of The Puppet Master, Eric Doyle is on a tour of the carnival and he sees Evan and Josh happily juggling together.

In chapter 2 of Purpose, Evan watches as his brother steps in between Samuel and John Mulligan. Evan recognizes John as the agent who tried to catch Josh and himself. Evan tries to throw a few punches at John but ultimately stops Josh from fighting.

Evan has the ability to sense danger. He used this in a bar fight to avoid being hit and uses it to make sure that his juggling routine with Josh does not fail.