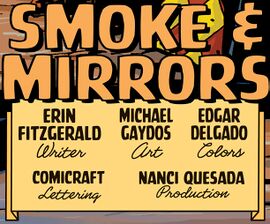 Edgar grabs Caleb from behind and tells Amanda to go back to her mother. Amanda listens to Edgar and leaves but refuses to return to Lydia; instead, she travels around the carnival. Amanda sees Jennie and Gail Bowman practicing their fire breathing act and Amanda mentally notes that she wants to be "adopted" by them. Chris Bowman then argues with Gail about Samuel and claims that they are being blackmailed. Gail argues back at Chris, asking if he remembers why they are being blackmailed. Amanda continues her journey and finds "Little Miss Goldenrod" in her tent. Amanda makes another note to herself on her desire to be friends with Goldenrod. Amanda then comes across a memorial for Arnold and comments on his importance. Before finally returning to her mother, Amanda comments on her last "mission" and knocks on Samuel's door. Samuel opens it and states that she must be Amanda.