Michael Green was a writer and co-executive producer for the show Heroes. Green joined the crew immediately after the pilot episode and worked on the first two seasons of the show in this capacity.

Green's writing and production credits include Smallville, Jack and Bobby, and Everwood. He has also written for Sex and the City. After Heroes, Michael created the television show Kings. 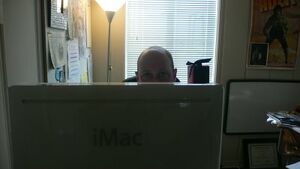 Michael hides behind his computer.
Retrieved from "https://heroeswiki.ddns.net/index.php?title=Michael_Green&oldid=89781"
Category: