Ryan Hanover is a Marine in the United States Marine Corps recruited by Pinehearst as part of their super soldier program.

Ryan trains with the other recruits at Pinehearst Headquarters in Fort Lee.

Twelve hours before Angela Petrelli's interrogation of Private Mills, Ryan gathers up three samples of the formula and argues with Rachel Mills and David Sullivan about girls being in the military. Ryan then tells Rachel she should be the first one to be injected when, suddenly, an unknown explosion goes off. In the aftermath, Rachel asks David where Ryan went, and David says he doesn't know.

Graphic Novel:Stuck in the Middle

While writing a letter for his mother in a storage closet in Pinehearst Headquarters, Ryan recalls his service in Iraq, and notes that he was one of those made it back alive and is going to save the world. He also writes that he does not intend to come home, but to stay on at Pinehearst. Ryan next spots Rachel Mills taking a shower through a crack in the wall and overhears Tracy Strauss and Senator Petrelli talking about the formula through a vent. To hear better, Ryan gets closer to the vent by standing on three boxes of Johnny Luck cleaning supplies. However, he loses his balance, collapses on the floor and runs out of the closet, leaving his signed letter behind. Ryan walks past the showers and denies hearing anything when Rachel asks him about the noise.

As Rachel Mills is assisting David Sullivan, Ryan reveals himself, having just injected himself with the synthetic formula in hopes of saving himself after receiving a large wound across his stomach. While he is distracted, Rachel steals one of the two remaining doses. Ryan draws his gun claiming the serum is for him, and when Rachel injects David, he shoots her in the shoulder. The two watch as David begins to manifest a synthetic ability.

Ryan continues to point his gun at David Sullivan and Rachel. Ryan fires a round towards David. Still growling, David takes off super fast with his ability and hides nearby. Rachel says for Ryan put the gun down, but Ryan says he won't, Rachel then uses a small piece of metal debris to knock Ryan to the ground. Ryan gets up and prepares to shoot Rachel again; but, before he can, David grabs him and drags him out of view, and presumably killed him off-screen. Even if he wasn't killed, he most likely died when the laboratory crumbled.

According to his character reference at NBC.com, Ryan Hanover grew up in an impoverished neighborhood of West Memphis, Arkansas. Ryan's dad was an alcoholic and his mom worked as a waitress for much of his childhood. On becoming a teenager, Ryan began getting in and out of trouble with the law. However, Ryan decided to straighten up after his brother died; so he enlisted in the military to escape the influences in his world. Unlike the rest of the soldiers in Pinehearst's program, Ryan volunteered to be a part of it and was not simply recruited. 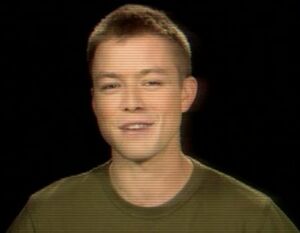 In chapter 5 of Operation Bad Blood in the iStory, the Pinehearst contracted player sees a technician watching a video feed of the recruits talking. The technician explains that he is screening outgoing mail from their new recruits for security breaches. Ryan's message back home is viewable by clicking the "video feeds" link on the page:

You never thought I'd finish anything, but I was the best in my unit. Now I'm part of a program that's going to save the world. They're turning me into a super soldier.