From Heroes Wiki
< Talk:Powers
Jump to navigation Jump to search

On the other hand, Nathan can very much control his flying, as can D.L. his phasing, and the Haitian's memory manipulation.

And then we have an unusual category that includes Peter Petrelli (who can't control his absorption, but can control some of the powers he absorbs), Isaac (who may only be able to control his power while under the influence), and Hiro (who is still learning to have control over his time warping).

I know this is not an exhaustive list ... Does anybody have any ideas on the best way to include this information? Ryangibsonstewart 19:06, 21 November 2006 (EST)

Maybe we should have two lists, one which is controlled powers and the other uncontrolled.Heroe 19:54, 1 December 2006 (EST)

Something about the formatting of this article drives me crazy. The sections are so short that, with the horizontal lines, it looks like ruled paper. The TOC is too long, but without it there's no whitespace. I'm really not sure what we can do to fix it up, though. We need the section headings for links; otherwise, I'd suggest we just bung the whole thing into a table and call it a day. Maybe a layout more like Season One, with the image next to each power, would make it a little less jarring. Anybody have any ideas?--Hardvice (talk) 05:14, 2 December 2006 (EST)

Okay, I made the changes, and I think it looks a ton better, and much more user-friendly. However, now it's glaring clear that we need some more pictures:

- RyanGibsonStewart (talk) 10:01, 2 December 2006 (EST) One more note: I don't like the picture of Matt's telepathy. Maybe it's good because it's just something different, but maybe that's why I don't like it. I don't know - I would love something from the convenience store when he was feeling overwhelmed, or maybe a shot of him kind of touching/cupping his ear. Okay, and one final note: I love that Power mimicry and Precognition are so close alphabetically because Peter Painting and Isaac Painting right above each other look great - and makes power mimicry all that more clear. - RyanGibsonStewart (talk) 10:04, 2 December 2006 (EST)

Is anyone opposed to getting rid of the "Space/time manipulation" category, and just making its three subcategories main categories? I don't like the way it looks - kind of pointless. It's much better when organized with every power a regular category (like in Powers/Test). - RyanGibsonStewart (talk) 16:45, 2 December 2006 (EST)

I can grab a couple screencaps when I finish the prophecy images. We should probably standardize the image size ... it just looks better when we have a series of images regularly arranged on the screen to have them all match. Or at least it does to my type-A eyes.--Hardvice (talk) 16:14, 2 December 2006 (EST)

I'm still of the opinion that the pic of Hiro in NY is a better choice for showing teleportation - it's more cinematic. It would need to be resized, though. It would actually be cool to see the pic of Hiro on the subway as "icon" for the timeline. Any thoughts? - RyanGibsonStewart (talk) 16:49, 2 December 2006 (EST) 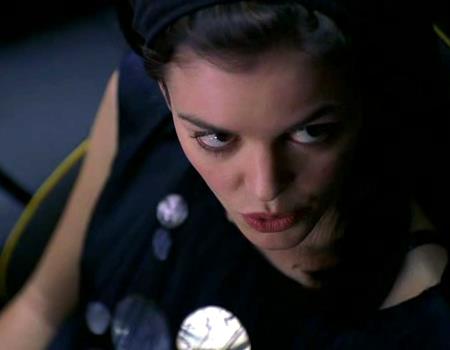 Better picture, looks creepy, but no indication what she's doing.

Clearly shows the effect, but not the cause, and not a good picture.

Wow, this page has gone through a lot of edits recently! I really like the table format - it surpassed my expectations. And bravo for making the links jump right to the power - well done! A few comments:

I actually have an issue with the way the powers are labeled right now. If Ted's power is 'emotional,' does that mean Flight went from an 'emotional' (Nathan's car crash made him afraid, which triggered the power) to a 'controlled' power? The same goes for Precognition. As Peter showed, the power itself is not induced, it is only Isaac that needs help to bring his power out. These things are subjective labels based upon the person's ability to use their power, not accurate labels of the power itself. The bar scene where Matt sees the Haitian suggested to me that Matt had some ability to focus his ability (where he stared at people and their thoughts came in).

I would suggest a separate set of labels. Innate (as in does not need to be learned or consciously controlled and affects only the possessor): Ranges from Claire's healing (it happens when it can, can not be stopped) to Niki/Jessica's physical prowess to Charlie's memory. Reactive: Peter's power mimicry, perhaps, as it triggers when he's near a Hero and decays away afterwards. Controllable: Most abilities seen. Uncontrollable: Not sure we've seen any powers that are uncontrollable yet, but I'm just putting it up here.

These labels describe how the power functions, not the level of mastery each Hero has over their power. That's why I would prefer them. [ Jared 1300, 3 December 2006 (EST) ]

Personally, I'd recommend eliminating the activations entirely. They seem to me to be more indicative of how a particular character deals with or "activates" the power rather than a property of the power itself. Easy example is that Isaac's precognition is induced, however Peter's precognition wasn't. (Admin 23:00, 3 December 2006 (EST))
I'm not a big fan, either. They seem somewhat arbitrary ... Nathan can control his flight, but he's also flown against his will. Hiro has teleported intentionally and accidentally. Ted boiled water intentionally and gave his wife cancer unintentionally. We can take it out of the template and leave the variables in the template calls in case we decide to bring 'em back.--Hardvice (talk) 23:08, 3 December 2006 (EST)

Agree - they aren't quite clear. I do think we should have them noted somewhere, though - maybe the talk page is enough? It will look much better removed.

Since they vary by character (and circumstances), and not really by power, the best place is probably the "Powers" section of each individual character.--Hardvice (talk) 00:10, 4 December 2006 (EST)

For powers Sylar has, should we label possessors like "Sylar (from Brian Davis)" instead of "Sylar, Brian Davis"? This kind of format would be clearer and more flexible for any future curveballs thrown by the writers where multiple people have the same power.

Is anybody opposed to changing the name of the Haitian's power from "mental power suppression" to just "power suppression"? The mental part seems kind of superfluous to me. - RyanGibsonStewart (talk) 22:27, 3 December 2006 (EST)

I am opposed to it. :) I may have been the one who originally changed it to "mental power suppression" since there's no evidence yet that The Haitian is able to suppress powers other than those that affect the mind (e.g. telepathy, suggestion, etc.). I think I know where you're going with it, though, in that the powers in Heroes all originate from the mind so they're all "mental powers" in a way. If someone can suggest a better description than "mental" I'd be all for changing it, but I think it's important at this point not to assume he can suppress all powers. Can he stop Claire from regenerating or Nathan from flying? Nathan did fly away from Mr. Bennet and The Haitian before so it's possible he cant stop that kind of power, but can interfere with any power that attempts to access the brains of others. (Admin 22:55, 3 December 2006 (EST))

I'd like to find some way to combine his powers like we did with Hiro ... based on what Mr. Bennet says to Sylar in the extended previews for this week's episode, it's clear that the Haitian has only one power, but I'll be darned if I can name it (Mental manipulation?)--Hardvice (talk) 23:04, 3 December 2006 (EST)

"Mental manipulation" is, actually, exactly what I was thinking. (I was so excited to suggest it - Damn you, Hardvice!) Other suggestions: "Mental control"? "Mind control" (though I think this has the wrong connotion, and doesn't clearly address power suppression)? Or we could just call it "Power and memory modification" - blunt, but it's descriptive... - RyanGibsonStewart (talk) 23:23, 3 December 2006 (EST)

Mr. Bennet definitely said that all the other evolved humans they found had only one power. I assume that means The Haitian, as well. Shall we combine his powers? Did we decide on a name? Any thoughts? - RyanGibsonStewart (talk) 01:39, 5 December 2006 (EST)

I'm happy with the description and image of Sylar's power. You have a way with words, Hardvice! - RyanGibsonStewart (talk) 01:36, 5 December 2006 (EST)

Just wanted to say that I really like the new structure of this page. The images and table are a great touch. Bravo, fellow Heroes! --ZyberGoat 13:08, 5 December 2006 (EST)

Personally I'd say no it doesn't need to be cited separately. I think that info could just be included in the character history if it's not already there for most characters. The first time a power is seen is usually noteworthy enough that it gets included in the history for that episode. (Admin 16:44, 5 December 2006 (EST))

I just noticed in Genesis, Mohinder says "Teleportation, levitation, tissue regeneration, is this outside the realm of possibility?" Does this mean that the technical term for Nathan's power should be Levitation? This would be consistent with what we saw in Six Months Ago when he floated above the car, but I consider Flight having forward motion, like he did in Hiros... Comments? --Orne 16:56, 5 December 2006 (EST)

That's a possibility. They call it different things in different episodes. In Homecoming Zach tells her that there's a chapter in Activating Evolution about spontaneous regeneration. Let's solict feedback and see what people think before changing it. I dont know if it's ever been referred to as rapid cell regeneration (as we have it labeled currently) within the show or in Claire's official bio. We could possibly change it to spontaneous tissue regeneration. (Admin 17:15, 5 December 2006 (EST))
The Genesis files have folders labeled, IIRC, "Human flight potential" and "Rapid cellular regeneration". Considering Chandra was studying evolved humans while Mohinder was merely describing them to his class, I'd go with Chandra's labels.--Hardvice (talk) 17:37, 5 December 2006 (EST)

I'm all for simplicity in the power names, so as to be more "catchy", yet still being sufficiently descriptive. Normally, I would quickly jump on a chance to call Claire's power something a bit more concise (I think just plain ol' "Regeneration" fits the bill). However, there are a lot of jumps throughout the site that would have to be changed. I think we're far enough into it, (and it is part of the show's expansive jargon) that we should just keep it as it is. - RyanGibsonStewart (talk) 22:17, 5 December 2006 (EST)

Will we want to expand these short descriptions into full articles at some point? I can see people developing in-depth analyses of how various powers work as we learn more about them over time. For example: Niki/Jessica has superhuman strength - does this imply superhuman durability as well, since any force she applies is also applied to her (i.e., she needs to be able to resist her own strength to use it)? --Ted C 12:53, 7 December 2006 (EST)

I'd like to suggest we put a limit on the number of items in the Examples section. These lists could get quite long if we keep adding more examples from every episode for years to come. I think we should limit the list to the ten "best" examples of the power in use. These will be the examples that best help us define the how the powers work and what their limits are. --Ted C 12:21, 12 December 2006 (EST)

That sounds like a good idea. Right now we have 4 articles (space-time manipulation, regeneration, telekinesis, and telepathy) that have more than 10. I think they look fine, but you're right - when we get to the end of the season, they will start to look pretty unruly. I don't mind having a lot of examples, but let's pare them down when we get further into the season. - RyanGibsonStewart (talk) 12:56, 12 December 2006 (EST)