The Greatest American Hero is a television series about special education teacher "Ralph Hinkley", who is given a red suit from a group of aliens, which gives him superhuman abilities. After he loses the instruction book for the suit, comical situations ensue as he learns to use the suit by trial and error. Aired from 1981 to 1983, the show starred William Katt as Ralph.

Emma and Peter watch the colors produced from the singing of a children's choir at Mercy Heights Hospital. The song they are singing is "The Greatest American Hero (Believe it Or Not)". 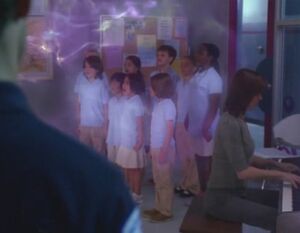 This is what the colors of the theme song look like.