From Heroes Wiki
< User:Radicell
Jump to navigation Jump to search

Heroes: The Game is a sandbox-style video game developed by Radisoft. The game is set in the same universe as that of the NBC sci-fi show Heroes, and its storyline takes place in the fictional city of Costa Verde, California. Set in 2007, the game follows protagonist William, a Costa Verdean young man in his 20s, as his special abilities journey him into the unexpected, crossing paths with the events of Volume Two, Three, and Four of Heroes.

The game features "open-world" gameplay, similar to the style of the Grand Theft Auto and Midnight Club video game franchise. The storyline is composed of "missions", dealt by various characters in the game, that the player must complete. These missions are non-linear, such that if ever there are multiple missions available, the player can opt to complete any mission in any order. Aside from the storyline, the player can do various odd-jobs around the city to make extra cash. For a complete list of storyline missions and links to each one in detail, click here.

Heroes: The Game consists of a large, open environment in the form of the city of Costa Verde, in which the player is free to move around. On foot, the player is capable of walking, running, jumping, swimming, and climbing, as well as using his special abilities. The player can also drive cars and other vehicles, whether given to the player by employers and/or friends, or stolen off the street using the player's special abilities.

The open, non-linear environment allows players to freely choose how they wish to play the game. Storyline missions, while necessary to progress through the game and unlock certain parts of the city, are not required, and players can choose to play them at their own leisure. While not tackling a storyline mission, the player can explore the city or do the various odd-jobs the game offers.

William's innate ability is to acquire others' abilities through physical touch. There is a large variety abilities available for William to acquire. Some are acquired over the storyline of the game, while others can be acquired through odd-jobs. After acquiring the ability, the player is free to use the ability for whatever purposes, ranging from using it to complete missions, to wreaking havoc on the streets. For a list of ablities featured in the game, click here. 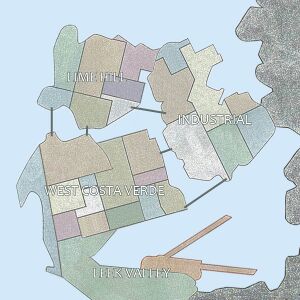 A map of Costa Verde, CA, the game's setting.

The game takes place in the fictional town of Costa Verde, California, originally conceived by writers of Heroes. It is the home of Heroes characters Claire and Noah Bennet and their family, as well as West Rosen and Alex Woolsly. The city is divided into four districts. West Costa Verde is home to the major tourist attractions in town, featuring several beaches and seaside resorts, and also includes Downtown, which lies in the centre of the city, and is the financial and commercial hub. Towards the east is Industrial, the workhorse of Costa Verde, sitting upon a desert and home to rows of factories and lower-class housing. In the south is Leek Valley, which is filled with farmlands and is popular for outdoor getaways. A freeway runs from Downtown through Leek Valley, leading to Los Angeles. In the north is Lime Hill, the polar opposite of Leek Valley and the higher-class residential district.

Several Heroes characters will appear in the game; some will have major roles, while others will have cameo appearances. New characters will also be introduced. The player controls William, a young Caucasian fellow who serves as the game's protagonist.

The game is continually in development. Radisoft will be releasing missions one by one. The first mission, Intro, was released on March 20, 2010. See here for a list of all missions.

Due to Radisoft's busy schedule, the release of missions is postponed until Summer of 2010, pending further notice.