From Heroes Wiki
< User:Radicell‎ | The Game
Jump to navigation Jump to search

A note about how this fan-fic is going to work. Each installment is a "mission", a part of The Game that the player must complete. Those of you who have played games like GTA will know what I'm talking about. I (User:Radicell) will write these missions, and they will be in script form. Each mission will include scenes, as well as gameplay. Scenes are meant to be watched, like short video clips in which the story advances. When gameplay starts, the player will have control and will set about to complete the mission.

Upon loading up the game, there is a menu. There are three choices, and they are "New Game", "Options", and "Quit". The first mission starts immediately after clicking "New Game".

The camera flies over a jagged ridge, and a wide expanse comes into view. We see a forest, filled with jagged treetops. We hear a soothing tune in the background. In the distance, the woods cut off abruptly and there is a large concrete open area. The camera zooms towards it rapidly, floating over the woodland, through which a mountain road winds. As we approach the large open space, it becomes clear that it is in fact an airport: large passenger jets taxi along the runways while smaller vehicles navigate around them. 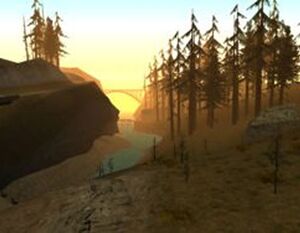 Leek Valley is a large woodland to the south of Costa Verde.

Meanwhile, the music is picking up tempo. The camera continues onwards, past the airport. Our view flies over a small strip of water, and then pans upwards, to take in a modern city skyline. The music becomes exciting. The streets are filled with people, while aircraft circle overhead. The camera moves forwards through the streets, passing through the busy financial sectors of the city, the cultural centers, the entertainment areas. As the waters come into view again, the camera swerves sharply to the left. It follows a grand-looking bridge onto another island.

On this end of the magnificent bridge, however, the features are obviously less gleaming. The music becomes darker and mellower. Factories one after another come into view, and instead of skyscrapers, smokestacks fill the sky. The camera repeats its street-viewing sequence, allowing us to witness construction workers on rusty scaffolding, residents stuffed in cramped apartments, and a victim being mugged in the alley. The camera then pans out, allowing us to take in fully the conditions of this city’s working class.

It then continues on its journey, making a 180º turn and zooming in the opposite direction. We fly past a sign that reads "You are now entering Lime Hill." The gloomy music turns into a pleasant tune. In this area, there are no tall structures. Family homes with well-manicured lawns come into view, and in the distance, we see a few high-rise housing complexes. In the streets we can see a friendly police officer chatting with some old folks, as well as children playing in the park with their pets. In the midst of this happy setting, we arrive at a public location, bustling with people. This is a different crowd, however, as the streets of Downtown which we had seen previously. A sign at the entrance reads "Costa Verde Community College". The camera then zooms quickly through the hubbub of college students – and comes to a rest at the front doors of the main college building. A young Caucasian man, of dark, well-oiled hair and slightly tanned skin, carrying a backpack on his shoulders, smiles at the camera, and says, "Hi, I’m William." 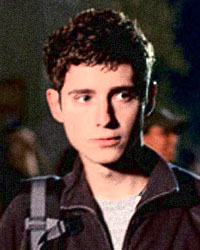 William strolls down the steps and makes his way to the bike rack. As he does so, he resumes narrating.

WILLIAM: I'm 22 years old, a college senior here in Costa Verde. A bit of background about my life... never had too much with my family. My dad was quite a crap father, and we've only spoken twice since I came to college. He wasn't abusive or alcoholic... he was just a poor parent. Never took care of me well. And I don't know about my mother... Dad says she disappeared before I was born, but I'm not so sure. Either way, it doesn't matter that much to me.

William arrives at the bike rack, unlocks his bike and pedals out into the open. He walks his bike quickly and catches up with an attractive blonde girl, holding some books in her hands. William puts his arm around her. 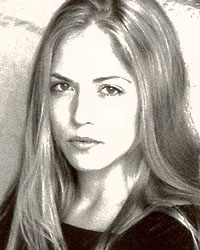 WILLIAM: (narrating) This is my girl, her name's Allyn. We were voted Cutest Couple for three years running. She's smart, attractive, sometimes wild but I love her anyhow. I don't know what she's doing in the Community College, but I know she'll make big money someday.

WILLIAM: (to Allyn) Wanna do something tonight, baby?

ALLYN: Of course! Call me.

Allyn flashes a smile at William, who kisses her goodbye on the cheek. William jumps on his bike and pedals towards the college gates. Someone pulls up beside him, also on a bicycle. He is black, about the same size as William, with a cornrow and wearing a plaid shirt with rolled-up sleeves. William turns to him and smiles. They begin talking. As they talk, William resumes narrating in voice-over.

WILLIAM: This guy's Phil McKaden, my best friend. We're pretty much like brothers. His story's like mine, never really had a family, except for his little brother, who's still in high school. I'll be open about it: me and Phil, we've carried each other through hardships. We've cried on each other's shoulders, yet we've had the best of times together. I love this guy. 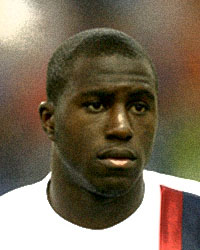 WILLIAM: Sorry, bro. I asked Allyn out already. But, hey -- it's the weekend. We could have a guys' night out tomorrow.

PHIL: Sounds awesome. Call me up.

With that, they arrive at the college gates. Phil gives a wave and pedals away to the east. William pauses on the road side to put his helmet on.

You are now in control of William, who is on his bicycle. Use the arrow keys to pedal forwards, backwards, or to turn. Tap the Up Arrow quickly in order to pedal faster. Directions appear on-screen, which read: Go back to your apartment before heading out for the night. You can use your GPS and radar, which are at the bottom-right of the screen, to help you get to the apartment, which is only a few blocks north of the college.

As he rides his bicycle back to the apartment, William begins thinking to himself out loud.

WILLIAM: Recently, I've been feeling so full of energy. As if I was meant to do big things. Sometimes I can feel the sheer energy in my veins, and I feel so powerful in the strangest way.

As the apartment building comes into view, he continues musing.

WILLIAM: It's probably just all the work getting to me. Better go home and take a nap before heading out.

When you arrive at the apartment, you will be instructed to get off your bike. Do so by pressing "F". Walk into the marker in front of the building, and you will be transported to your apartment. It is scrappy but spacious. The game will instruct you to save your game. To do this, walk over to the couch, and press "E". You will watch William lie on the couch and rest, and your game will be saved.

Whip out your cell phone by pressing the Up Arrow. You have two numbers in your phonebook -- Allyn's and Phil's. In order to proceed to the next mission, give Allyn a call by selecting her number and pressing Enter. (to be continued...)