Stephen Canfield was a prisoner of Level 5, who escaped during Elle and Sylar's confrontation. He was an evolved human with the ability to create black holes.

Sandra looks through Noah's files and finds a reference to Stephen and his ability to "create vortexes that make people disappear forever." Stephen has a wife, Elizabeth, and several children. He goes to his former home to try to locate his wife, but she has moved out and the place stands empty. He loses his temper and creates a vortex, but quickly shuts it down. Claire gets his attention just before tasering him. He wakes up from her attack and, after explaining that he's not a monster, calls his wife with Claire's assistance. When he and his wife agree to meet at a carousel in the park, Stephen is interrupted by Noah and Sylar, who attempt to recapture Stephen to bring him back to Level 5. Stephen creates a large vortex and runs, leaving Noah, Sylar, and Claire to save themselves.

Later, Claire finds Stephen at the carousel alone; his wife never showed up. Noah shows up and tries to force Stephen to create a vortex and destroy Sylar in exchange for his own freedom. Stephen refuses and, with nothing left to live for, creates a vortex and throws himself in it.

Stephen's Assignment Tracker 2.0 file at primatechpaper.com notes that Stephen was raised by a "hard-driving assistant district attorney". Stephen always insisted that he had been unfairly punished or wrongly accused for his actions. Stephen graduated from a military boarding school and began dating his future wife, Elizabeth, and married her when she became pregnant. Stephen manifested his ability to create a gravitational vacuum, accidentally killing his neighbor. The profile reports that, "despite two years of aggressive testing, the nature of Stephen's vortices remains a mystery." The psychological profile notes that Canfield's pathological defensiveness and borderline schizophrenic paranoia are his defining psychological characteristics. 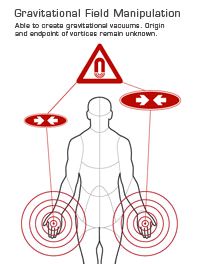 For Stephen Canfield's original Assignment Tracker 2.0 case file housed at primatechpaper.com, see file C006, and enter the password SCwem43ib. For a linked facsimile of the file, including full text and images, see here.

Stephen Canfield had the ability to create vortices.

According to his assignment tracker file at primatechpaper.com, Stephen's control index is 60%. His data analysis shows his biological level at 25, cerebral at 35, elemental at 55, and temporal/spatial at 90.

Please refer to Theory:Stephen Canfield for fan-created theories and other speculation.