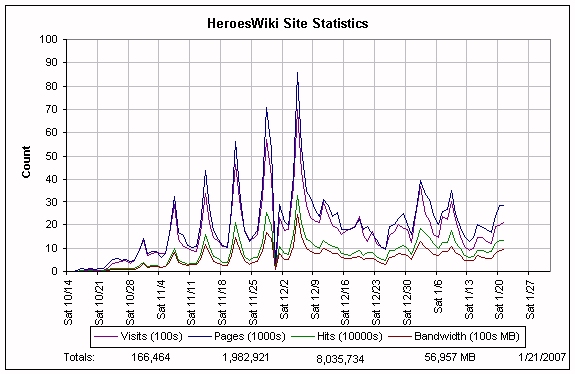 You can get total number of registered users here. As for the charts, I'm just cutting and pasting from a web stats tool I use, so while I suppose I could reverse the dates manually in the html, I dont think it's worth the effort especially because I update it frequently sometimes. I just put the current month at the top because that's the most relevant with previous months below it in case people care to check out the stats there, too. (Admin 16:50, 22 November 2006 (EST))

I agree with you about the chronology. It'd be nice to have it better ordered, but certainly not worth the effort ... Thanks for the info about the stats! Ryangibsonstewart 00:27, 23 November 2006 (EST)

There's a small increase when they put out a new graphic novel and a larger increase when they've been showing Heroes reruns. I'm really looking forward to seeing what happens on January 22nd. :) (Admin 09:17, 10 January 2007 (EST))

The numbers are growing ... It's like Christmas Eve! - RyanGibsonStewart (talk)

It's 11 pm EST, and I just checked the current site statistics. I noticed that as of now the numbers for today are low for any normal day and super low for a Tuesday after a new episode. I'm guessing that only a fraction of the statistics for today are logged thus far. Am I right? How does that work? And how is the site really doing?--E rowe 23:04, 30 January 2007 (EST)

The last time Admin updated the statistics was 10:36 am today (noted at the top of the page). But you're right, today's numbers are a bit lower than usual. I know I was busy at work today and have been playing with the kids more than usual today, so I personally had a lot less time online. - RyanGibsonStewart (talk) 23:16, 30 January 2007 (EST)
I was waiting for someone to notice the lower numbers. :) This is pretty much the first time we've run without any Google Adwords. I wanted to see how well we'd do without the ads and I'm decently pleased. Last Tuesday I believe I spent $400 in advertising which is a lot for a single day (Monday was probably a couple hundred dollars as well). We're reaching the point now where word of mouth plus decent Google search rankings are driving a good amount of traffic to the site so our dependence on advertising should diminish. This is more or less a necessity since the amount spent advertising is orders of magnitude higher than revenue generated from hosting ads. Not using Google Adwords is going to skew the statistics though and we'll have to start doing comparisons using this week as our baseline. A lot of sites have links to our articles now so we're getting more visits by people actually interested in the information. So while number of visits will be less than before we should still see similar growth and activity. (Admin 00:01, 31 January 2007 (EST))

For those interested, here's the bandwidth utilization over the past 24 hours for (mostly) Heroes Wiki.

Wow, and the newest graphic novel hasn't even been released! This is officially the highest amount of visits this summer. -- RyanGibsonStewart (talk) 00:28, 18 September 2007 (EDT)

Got a new record

I'm starting to see The Symbol in the Heroes Wiki bandwidth graphs... hmm.